The Joyful Designs of Achille Castiglioni

What makes Achille Castiglioni furniture and light designs so special?

Most of us are familiar with the playful and ironic spirit of Italian designer Achille Castiglioni‘s designs, and one wonders how this came about. As we experience his furniture and lights, we do not question if these designs are “good” or “functional,” or if he was a good designer–he obviously was. But we do ask, “How come his designs deliver such a particular irony and inadvertently leave us with a smile on our face?”

We know Achille Castiglioni was sort of a lucky guy. He was born in Milan, Italy, into a loving family, nurtured by his parents, Giannino Castiglioni, a sculptor and coin engraver, and his attentive mother, Livia Bolla. He was the youngest of three sons, and his brothers, Livio and Pier Giacomo, who were seven and five years his senior, loved playing with the young Achille and included him in as many of their own activities as possible. 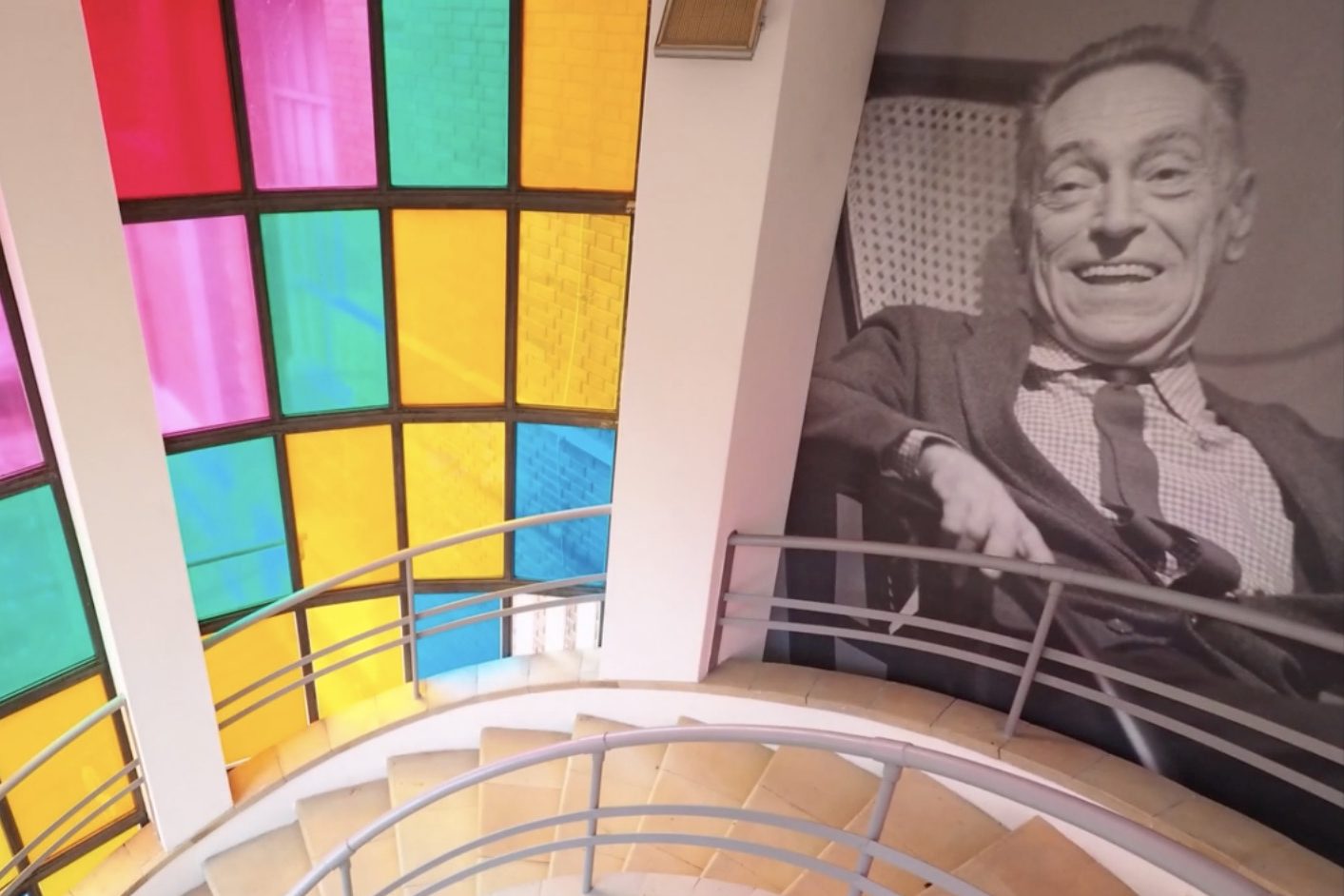 Achille Castiglioni exhibition at the Triennale di Milano in 2018

The coincidences among the three brothers were not that incidental; they resulted from a genuine admiration and emulation for each other. As one could have expected, the three of them became architects, but Achille, probably the most enterprising and inquisitive of the trio, ventured into studying art before deciding to follow the steps of his elder brothers.

Obviously, not everything that happened to the Castiglioni brothers was joyful and prosperous. When Achille was studying architecture, the ravaging presence of War World II was felt in many ways, and the family apartment on Piazza Castello 27, Milan, was bombed, which forced the Castiglioni family to move to the father’s adjacent studio. Aware of the limited potential for architectural projects in the midst of the war, and with the imminent need to earn a living, Livio and Pier Giacomo decided to focus their efforts on designing exhibitions, furniture, housewares, and appliances and built, without knowing, the perfect experimental laboratory, where Achille would land when he graduated in 1944–after the collapse of the Fascist regime in 1943.

As one reads stories about the Castiglioni brothers, a few things become very apparent: the real and profound connection that they felt for each other, their approach to life as a joyful game, and their innate optimism.

Italian architect Massimo Vignelli best describes what he saw in the Castiglioni family home when he wrote for an interview, “If I remember right it was the autumn of 1947. Another of those autumns in Milan with low sky, fog and humidity in the air. In Corso di Porta Nuova, just before the end of the road on the right, there was a Milanese house, with a courtyard and in the rear, in a separate building, there was the studio of the sculptor Castiglioni, on the ground floor, next to the entrance, there was the atelier of his sons, the architects Livio, Pier Giacomo and Achille Castiglioni. Upstairs, the house of the Family, and Mum, as the head. A typical family of Art Artisans, as existed once in Lombardy, when the whole family was involved in the ‘profession’, with the highest modesty and great closeness.” 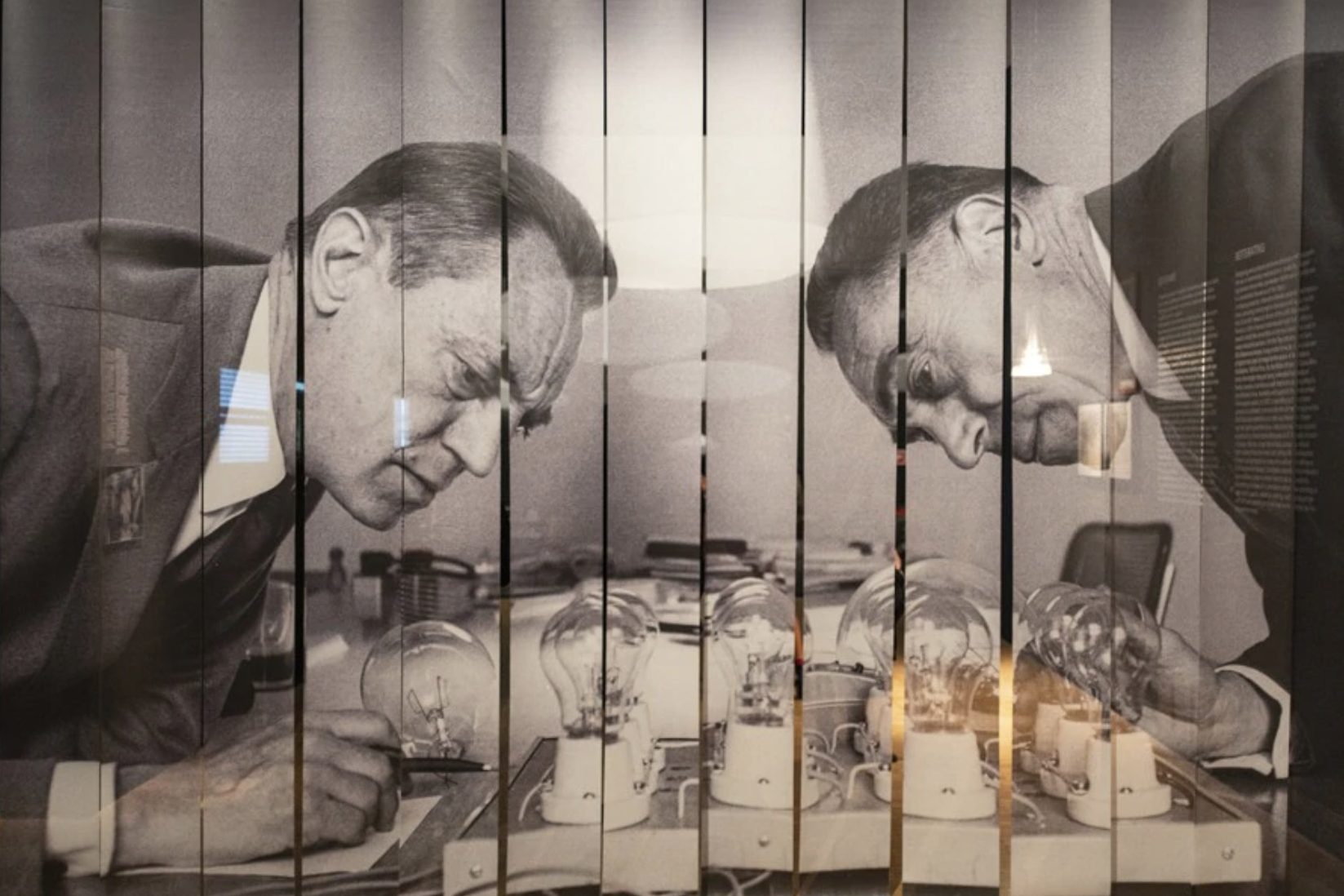 Livio, the scientist of the family, decided to build his own independent design practice in 1952, to explore radio waves, music, and technology–dedicating his live to the design of radio and audio equipment, while Achille and Pier Giacomo continued to work together from 1952 until 1968, when Pier Giacomo died.

This wonderful alchemy of life allowed each of the three to become highly curious, creative, and successful. But of the trio, Achille was the most inquisitive and, also, the luckiest as he lived the longest and thus created the most.

Below are some of Pier Giacomo Castiglioni’s and Achille Castiglioni’s designs that make us smile and also reflect. Every time we look at these objects, we are surprised by their simplicity, playfulness, irony, and, most of all, for their ability to communicate joy–a much-needed feeling and a reminder of what design can bring to us. Enjoy! 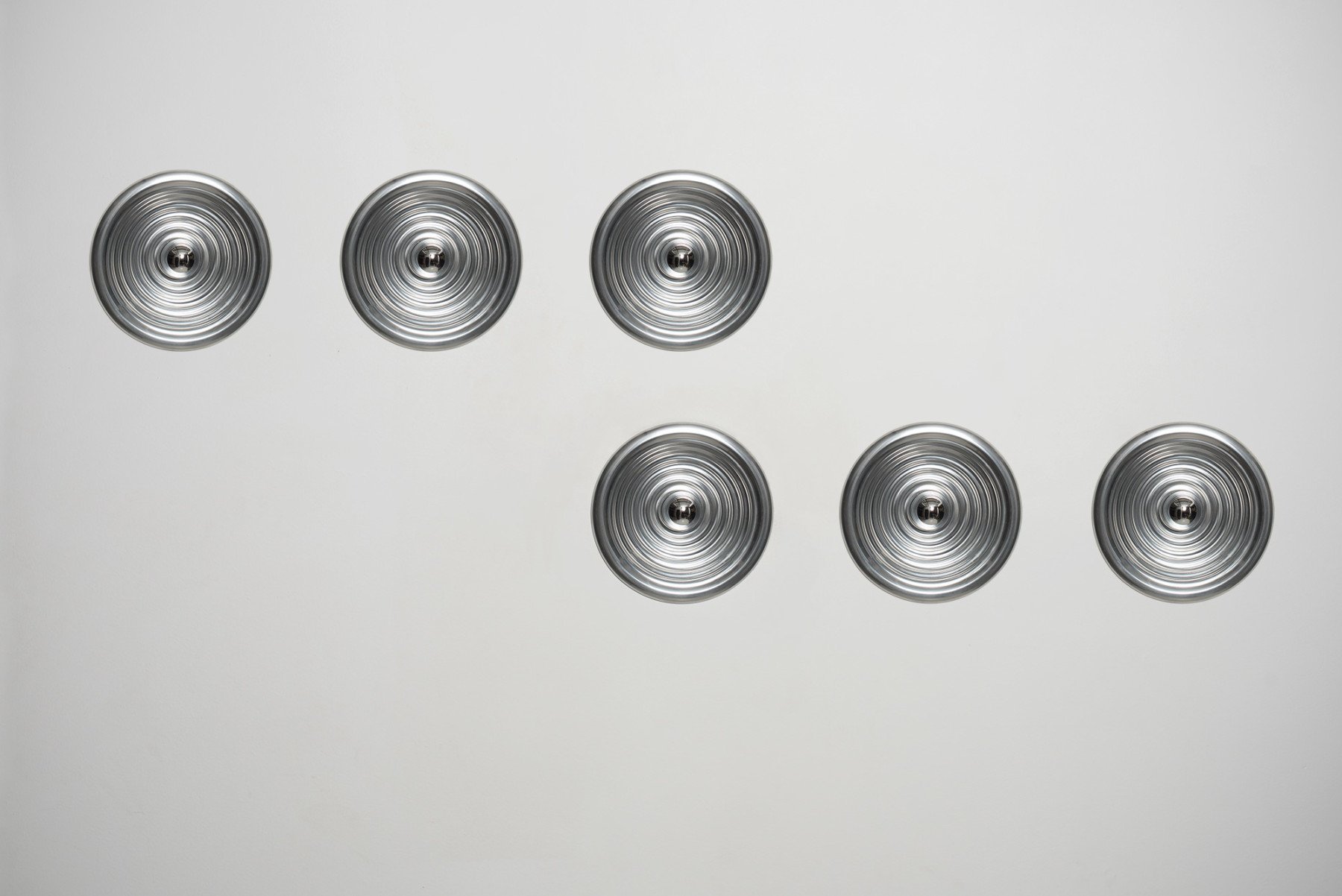 The Padina wall or ceiling light could not be more 60s. Now a classic, it was an instant hit when it came out, including among high-end designers. Its corrugated spun aluminum surface is shiny and undulated, reflecting concentric loops of light. It was all-in 60s, without the colors–just light.

The Cacciavite side table, or “Screwdriver” side table, designed by Pier Giacomo and Achille Castiglioni in 1966, is made out of birch wood black painted top and screwable birch wood legs in the shape of screwdriver handles. This table is unassuming, simple, easy to assemble and disassemble, and, importantly, easy to ship. 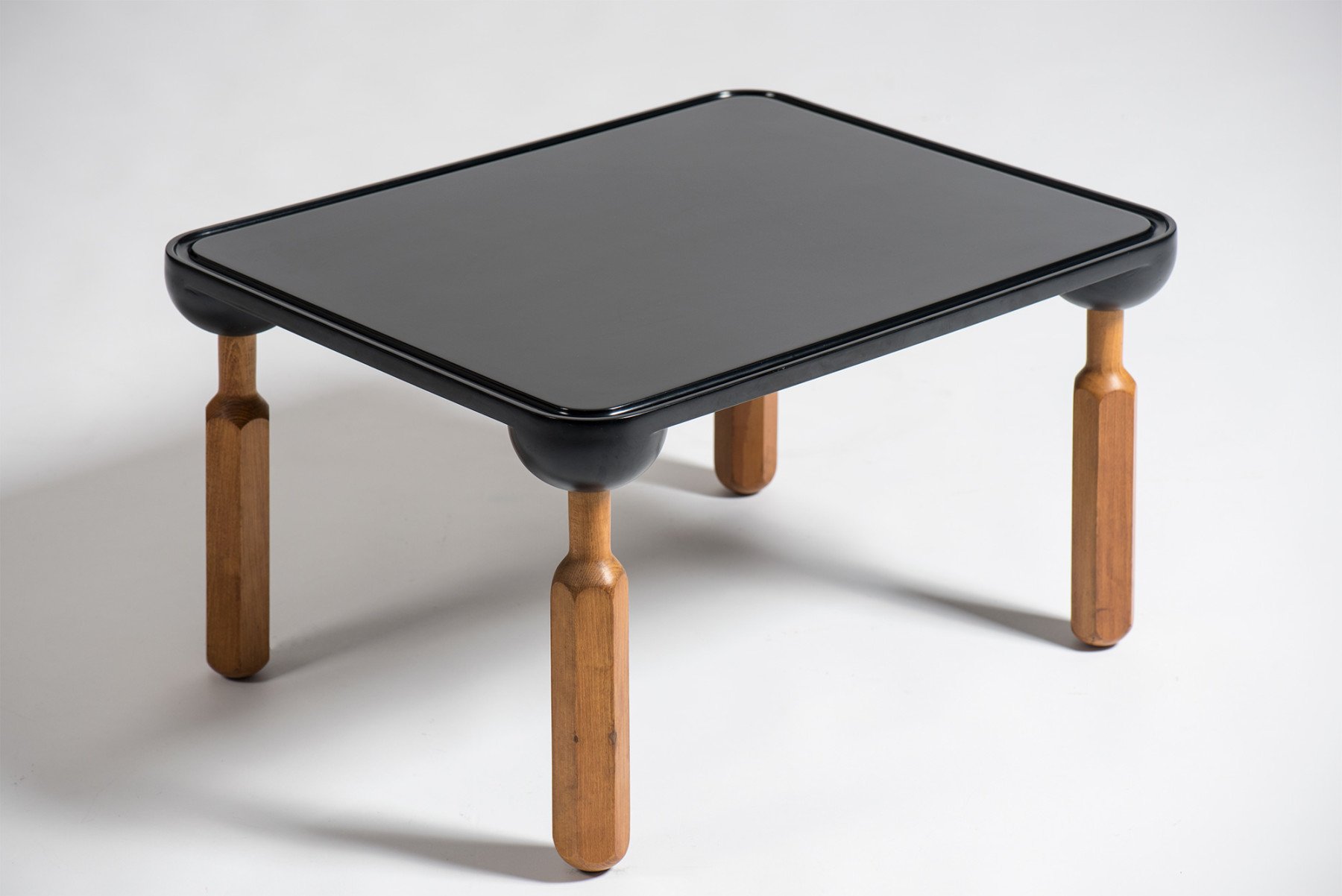 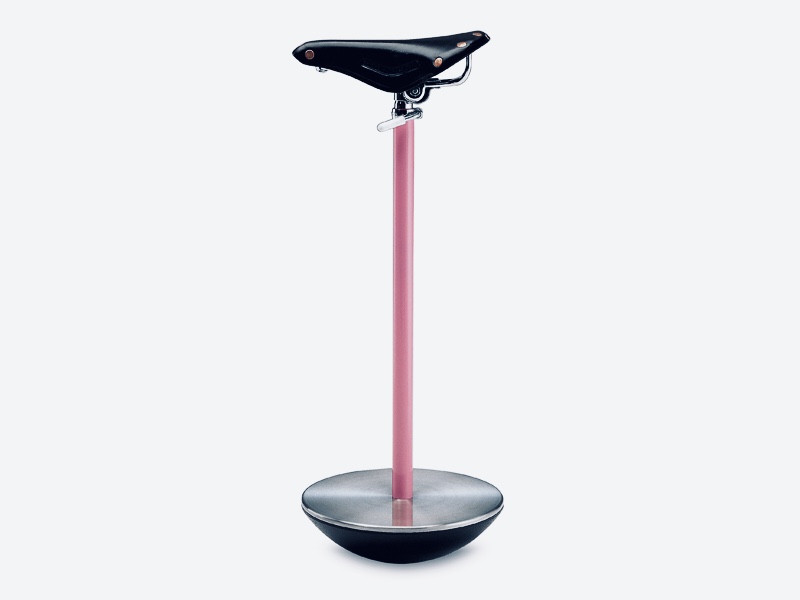 The Sella stool displays most of what makes Achille’s and Pier Giacomo’s designs so memorable. They designed it around the need for mobility, but by using a bicycle seat, they selected irony as the focal point of this design. Achille would later comment on the Sella design: “When I use a phone…I like to move around, but I also would like to sit, but not completely”

Capturing the Apollo Mission times, the Castiglioni brothers designed this outdoor chair and explicitly named it Allunaggio; which means “moon landing” in Italian. Although not produced until 1980, the chair was designed in 1966, in the midst of a complicated and transformative decade that was also inspired by John F. Kennedy’s goal to land on the moon. Need we say more? 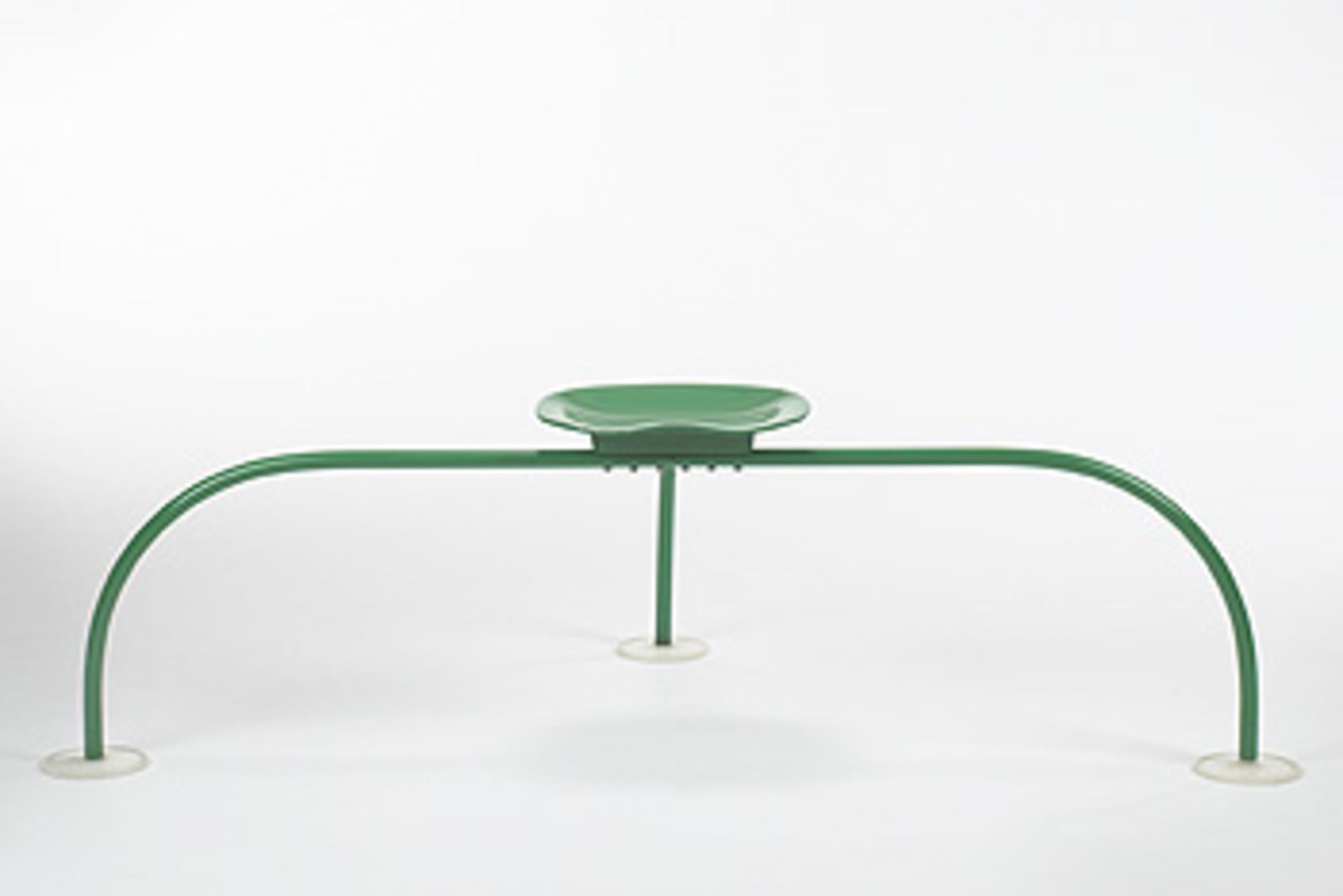 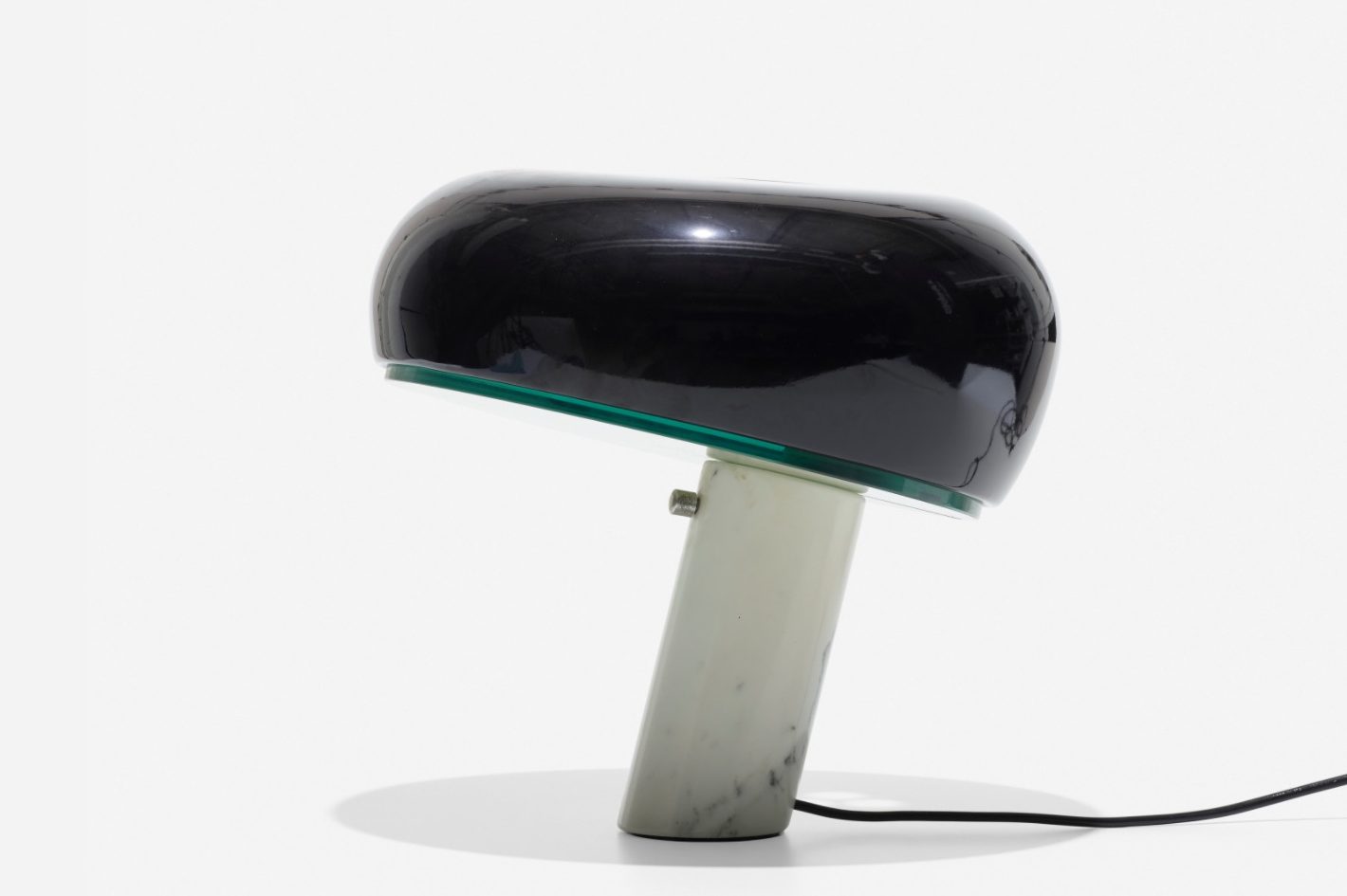 Snoopy lamp. Even if it is not confirmed where Achille and Pier Giacomo got their inspiration for the snout-shaped reflector table lamp, we think its  name sort of reveals the source. Nothing comes “out of the blue,” and one has to be reminded of the popular cartoon character Snoopy–Charlie Brown’s beagle dog with a big snout. Snoopy is innovative, fun, creative, elegant, and functional with plenty of light to illuminate a working desk, and a character to lighten the mind.

The Viscontea lamp is made out of a spray-on coating material originally intended for packing. Achille and Pier Giacomo, in collaboration with designer Tobia Scarpa and assisted by Dino Gavina–then co-owner of Flos, utilized this material, which they named “cocoon,” to design and manufacture lamps. Their first “cocoon” lights were the Taraxicum and the Viscontea in 1960, two years before the formal launch of FLOS as a lighting company. 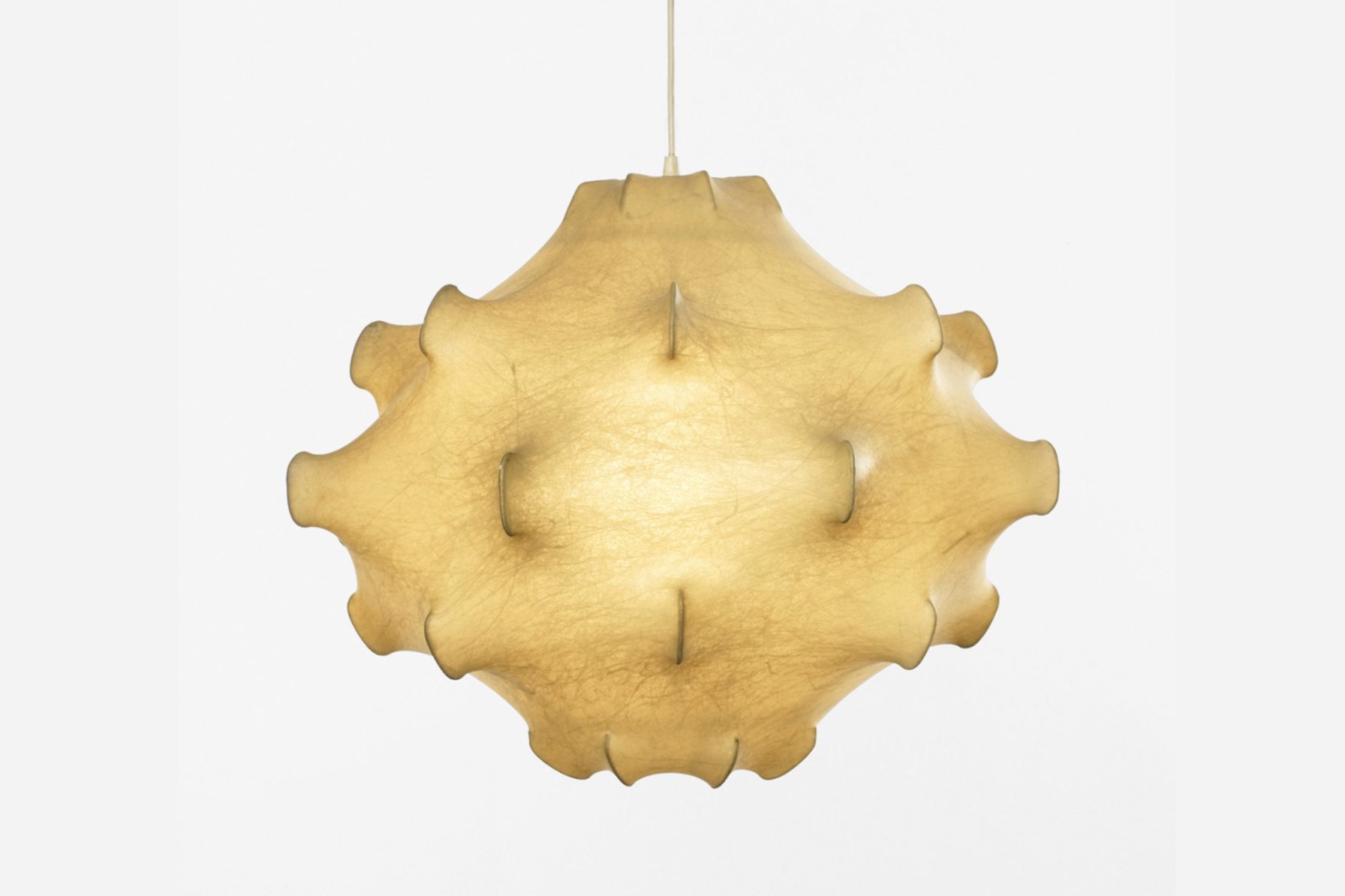 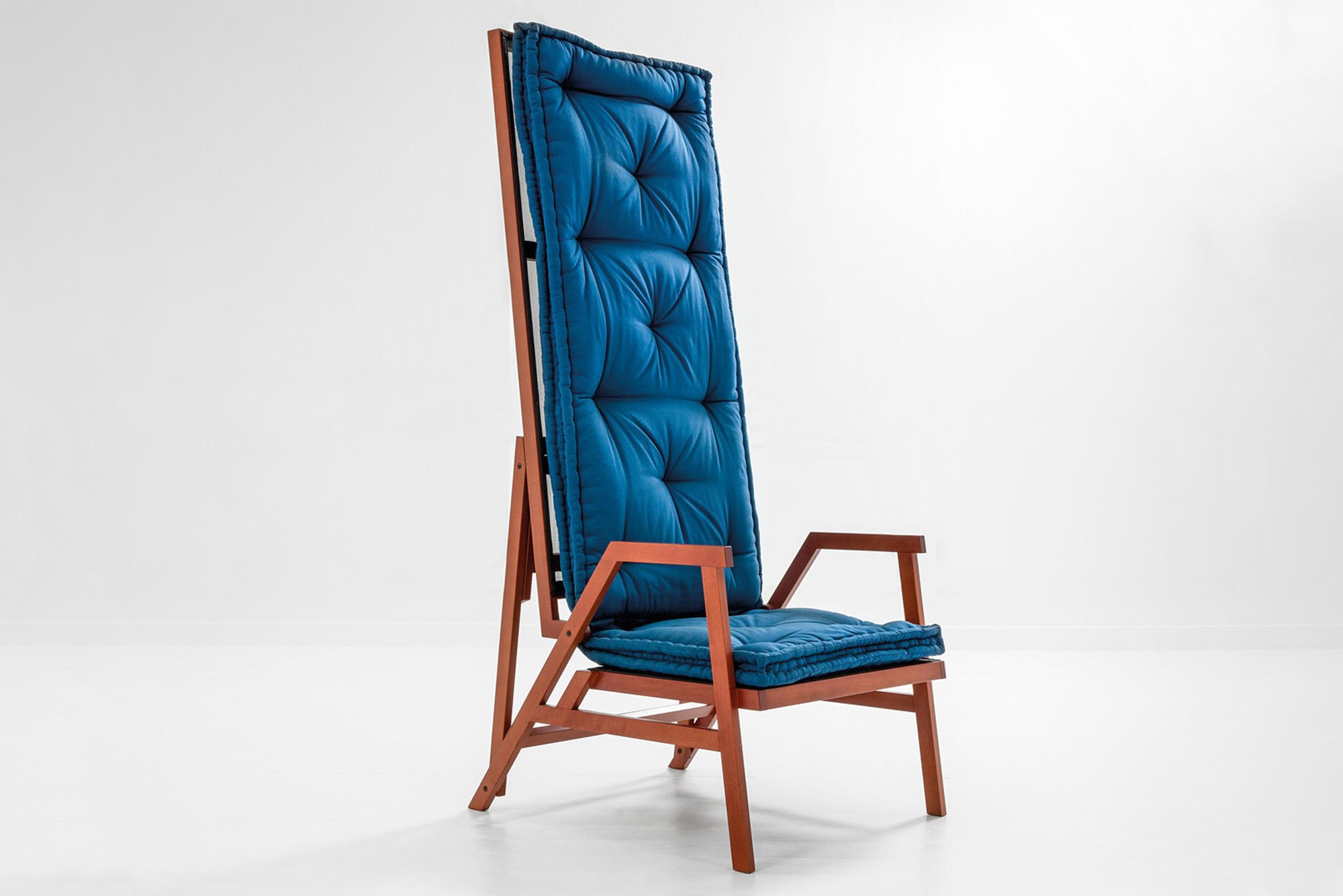 The Polet chair, designed Achille Castiglioni in 1992. The Polet derives its name from its intended double use as a chair (poltronoa) and as a bed (letto). The Polet is part of MoMA’s permanent collection.

The Bip-Bip floor lamp, designed in 1977 by Achille Castiglioni for Flos, would have been an ordinary design that combines enameled ceramic and steel, sort of reminiscent of the inexpensive light fixtures at the turn of the 20th century, had it not been for is heat-resistant metal loop, which brings a space-age look to its aesthetic, but that really functions as a handle to redirect the light in different directions. In 1987, Achille Castiglioni also designed Bis Bi wall sconces based on the same design. 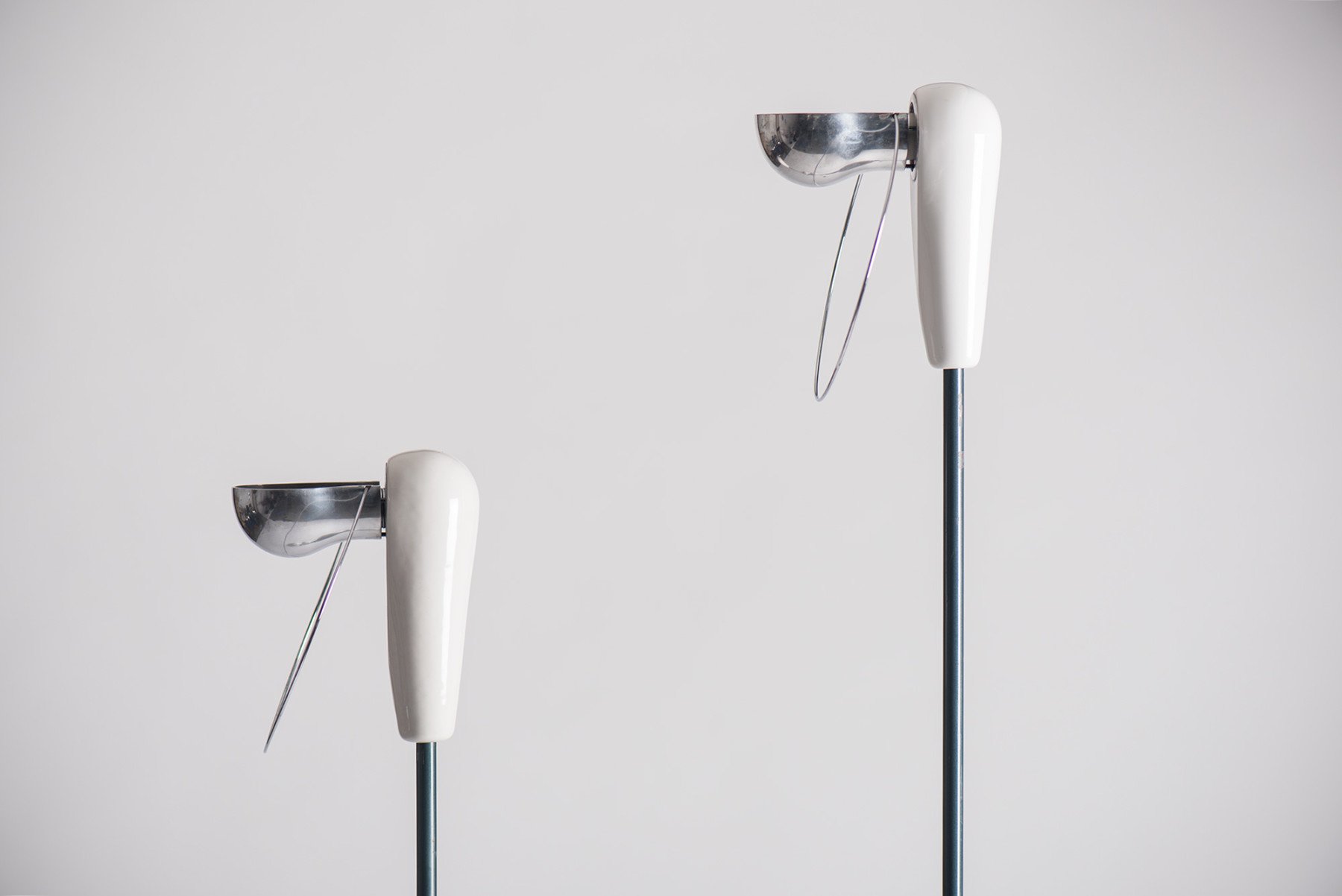 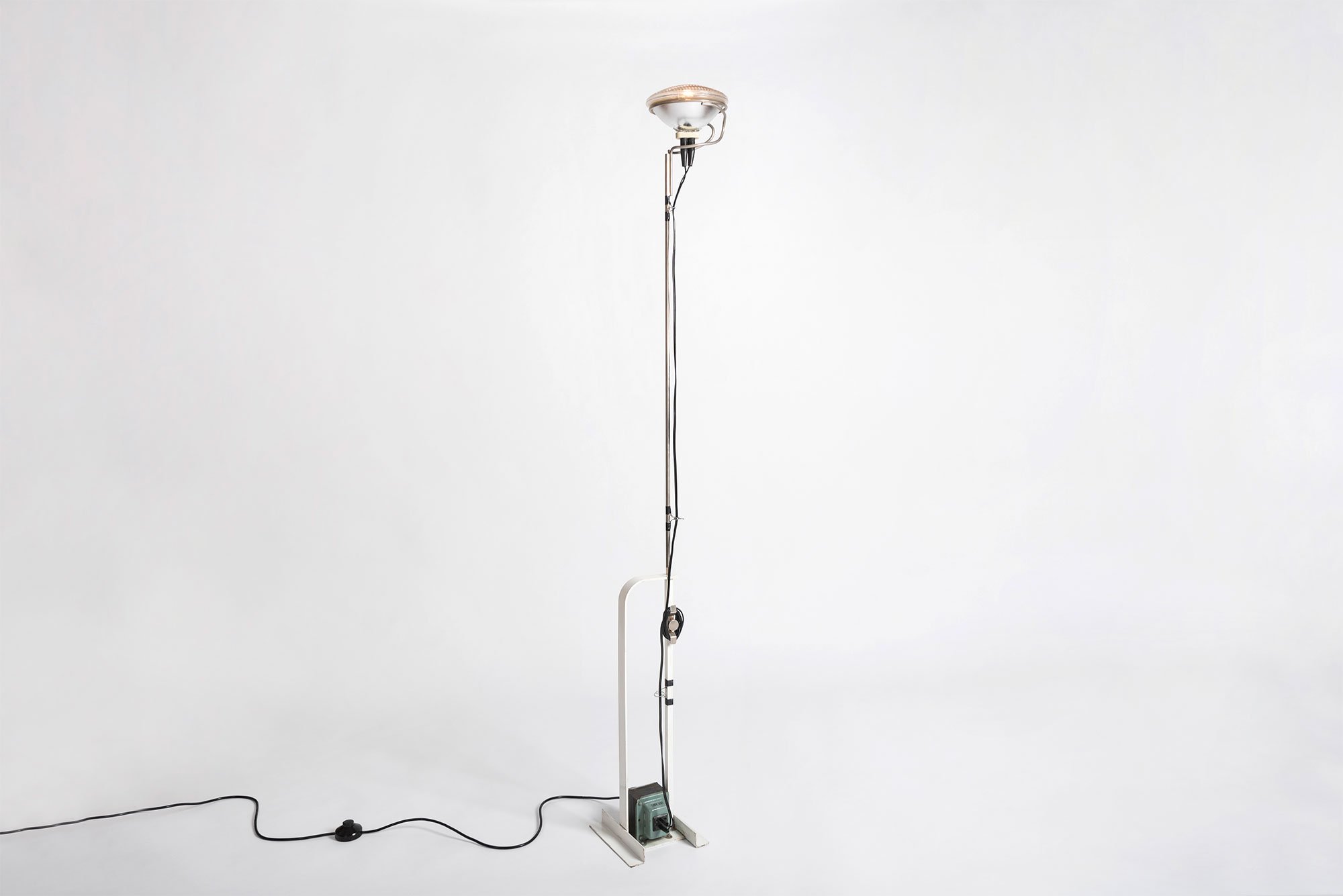 Toio, which means toy in Italian. The Toio adjustable floor lamp was designed by Achille and Pier Giacomo in 1962 as if it were a lamp put together by an inventive kid repurposing readily available materials. A visible and unadorned transformer, wires, and rods with a car reflector facing upward as its light source make the design of this lamp intelligent and quirky. Despite its unambitious qualities, this lamp is part of the MoMA permanent collection.

Mezzadro in this context means a sharecropper tractor. The Mezzadro chair, designed by Pier Giacomo and Achille Castiglioni in 1957, could not be simpler: a tractor seat bolted into a chrome bent bar with a wooden footrest that acts as a stabilizer. It is obviously inspired by the readymades of the early 20th century artist Marcel Duchamp, but sans manifesto–purely practical. 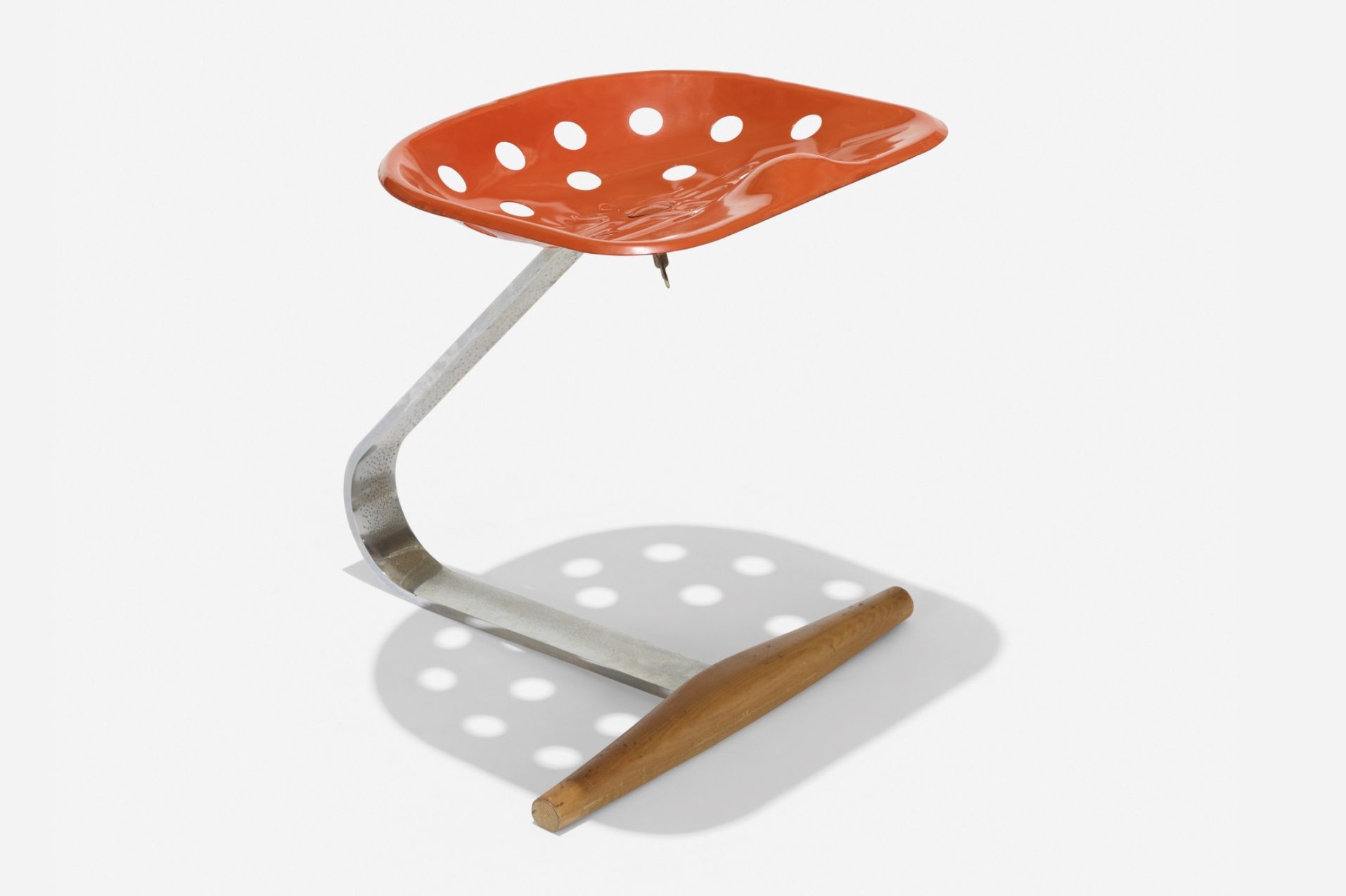 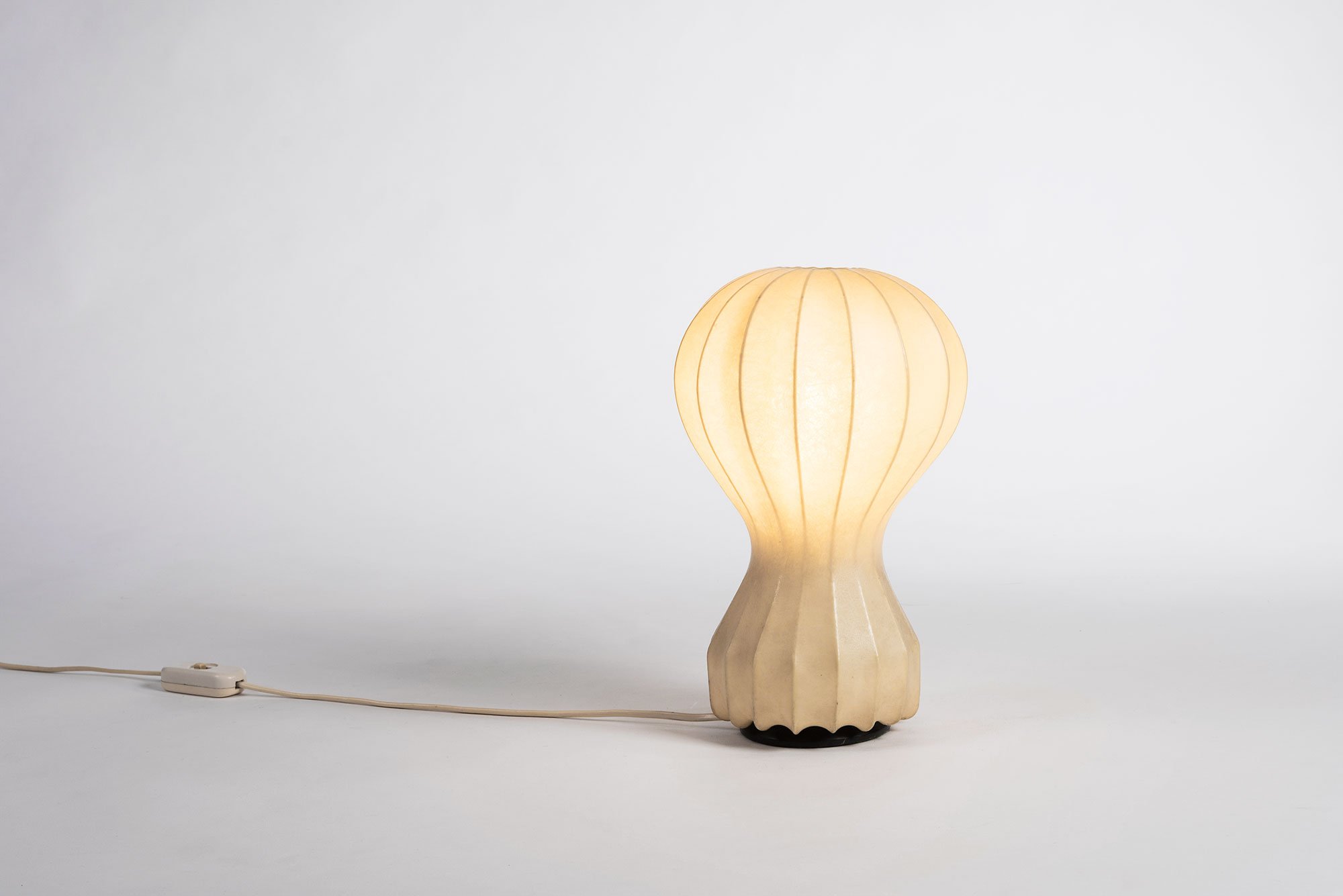 The Gatto table lamp is the third lamp designed by Pier Giacomo and Achille Castiglioni using the “cocoon” polymer. The first was the Taraxicum and the second was the Viscontea, Like the other two cocoon lights, the Gatto table lamp is light weight, and emits a wonderfully subdued ambient light.

Grip floor reading light. Although it looks like a stage microphone, instead of being made to talk to a large audience the Grip floor light was designed for the pleasurable and intimate act of reading in reflection. It provides a directed incandescent light beam to light up only the reading material without disturbing those around the reader, which makes the metaphor of a microphone the antithesis of its function (public vs. private and speaking vs. reading). It also has an ingenious gyroscopic knob opposite to the light source that you rotate to turn the light on or off. 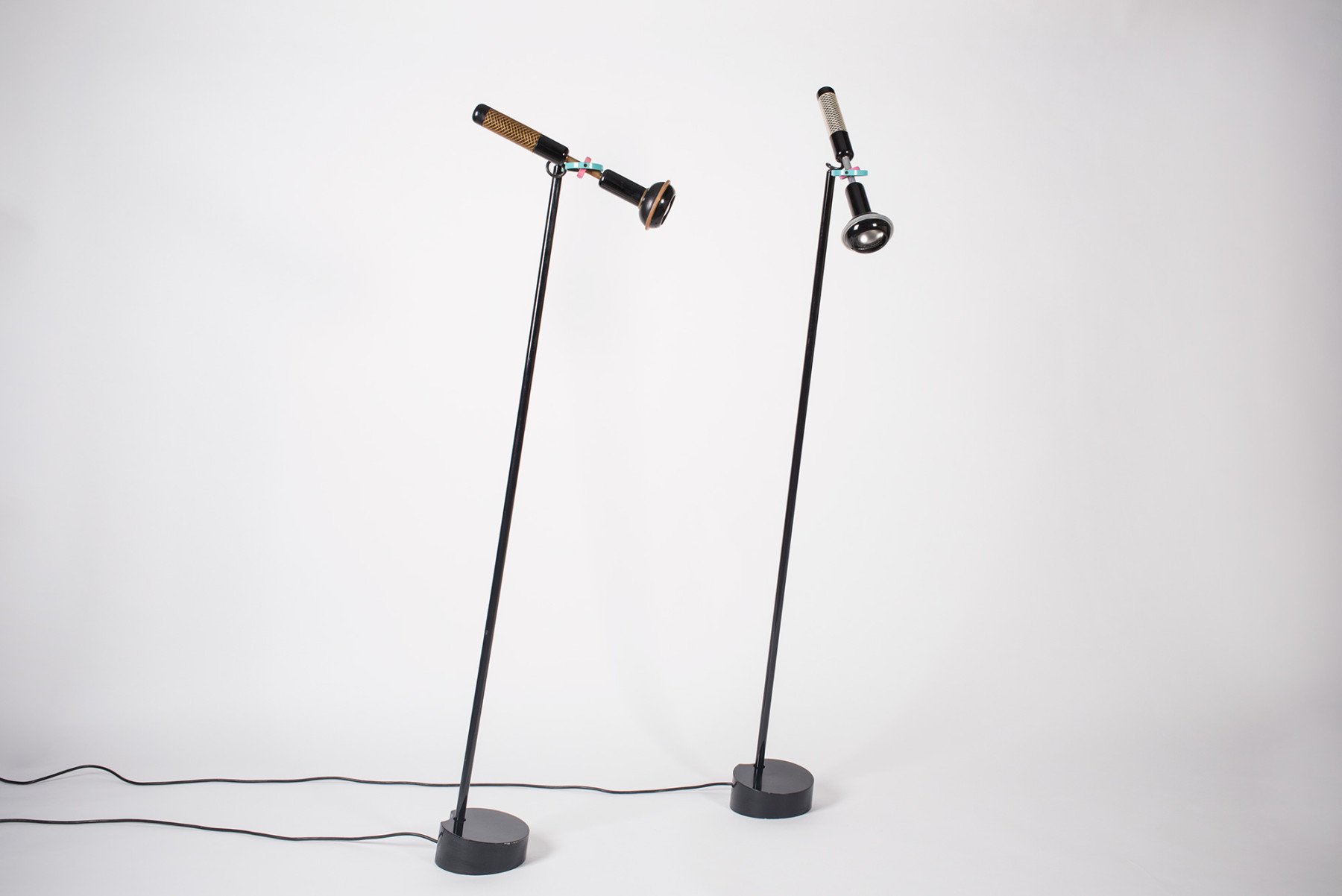 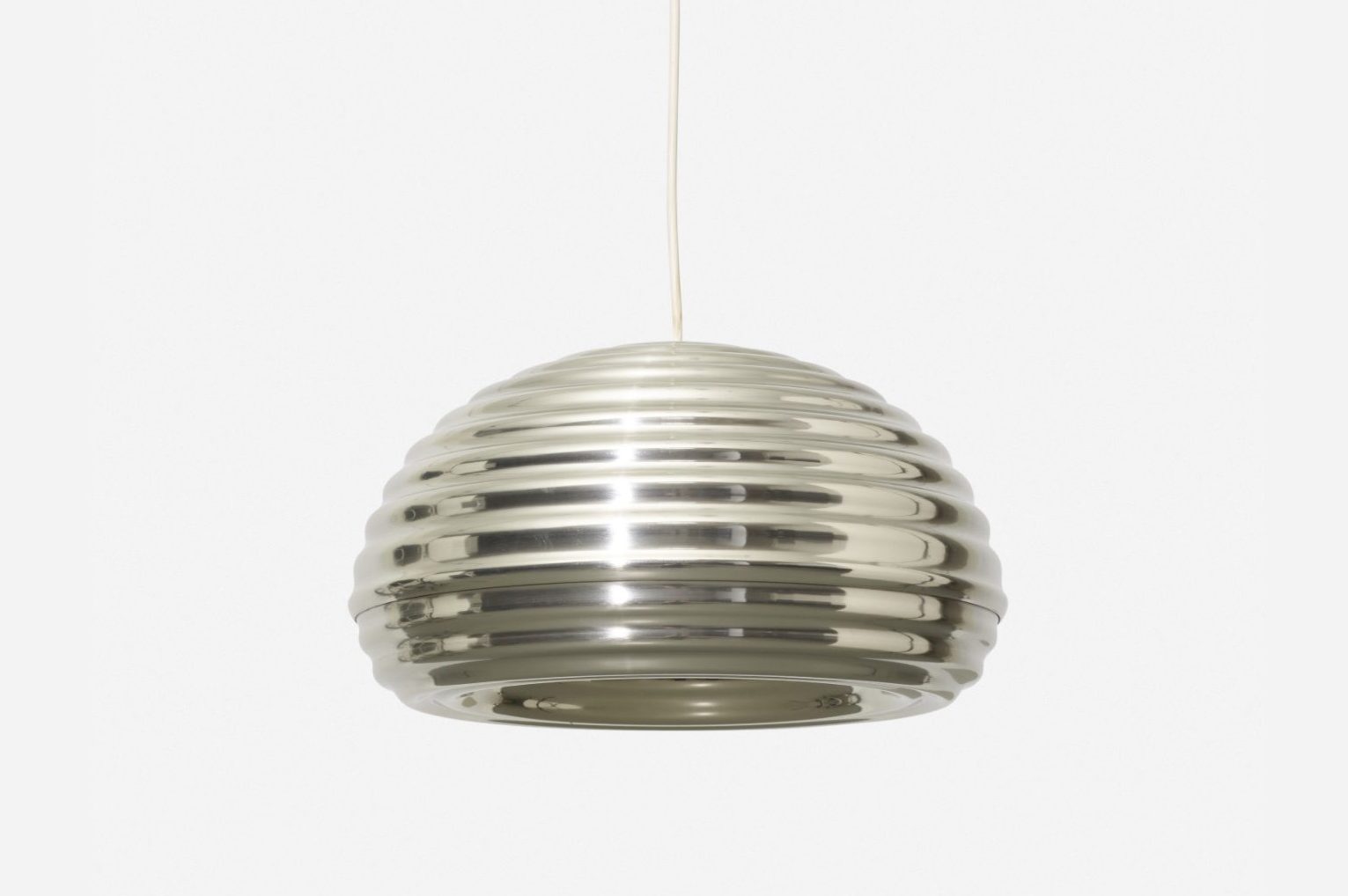 The Spliügen Bräu Pendant was originally designed in 1960–61 for the Splüngen Bräu brew pub in Milan, also designed by Pier Giacomo and Achille Castiglioni. When asked about the Spliügen Bräu pub, Achille said, “We designed the Splügen pub to be very Milan place. People from Milan are good humored and like to be seen, so we put them in a store front window.” The lamp was introduced by Flos in 1964.

The Spliügen Bräu lamp was designed for it to be noticed, and for people to see and be seen.

Leonardo table. This simple beech wood table arrangement that has been popular in artists’ and carpenters’ workshops for centuries. Hence the name “Leonardo,” as in Leonardo da Vinci. Pier Giacomo and Achille first designed the Leonardo table in 1950, but it was not commercially introduced until 1969, after Pier Giacomo’s death, with Zanotta. It consists of two trestles, also known as easels or sawhorses, that adjust at five different heights from 24″ to 32″, and a white laminate or tempered glass plated top. 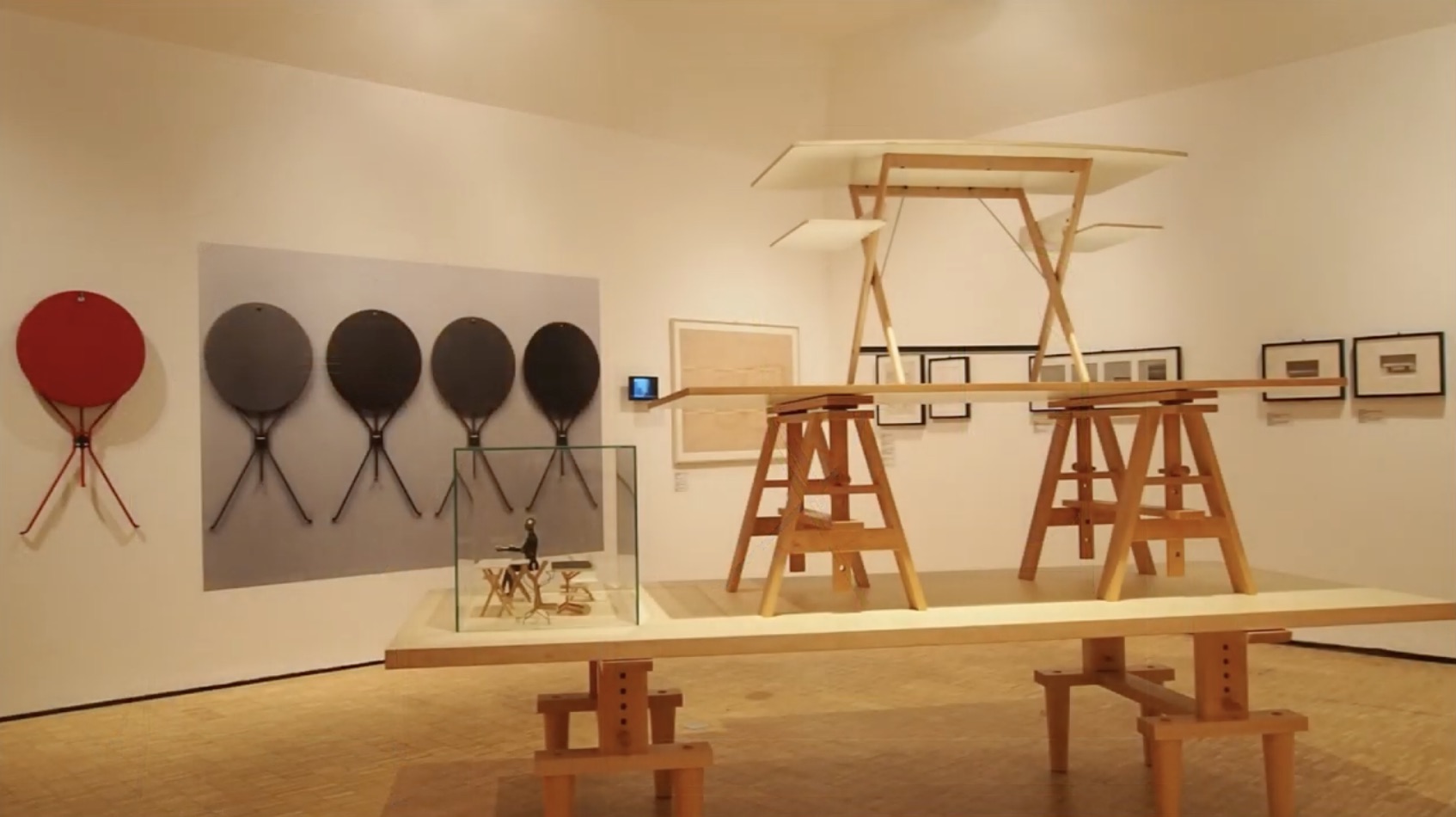 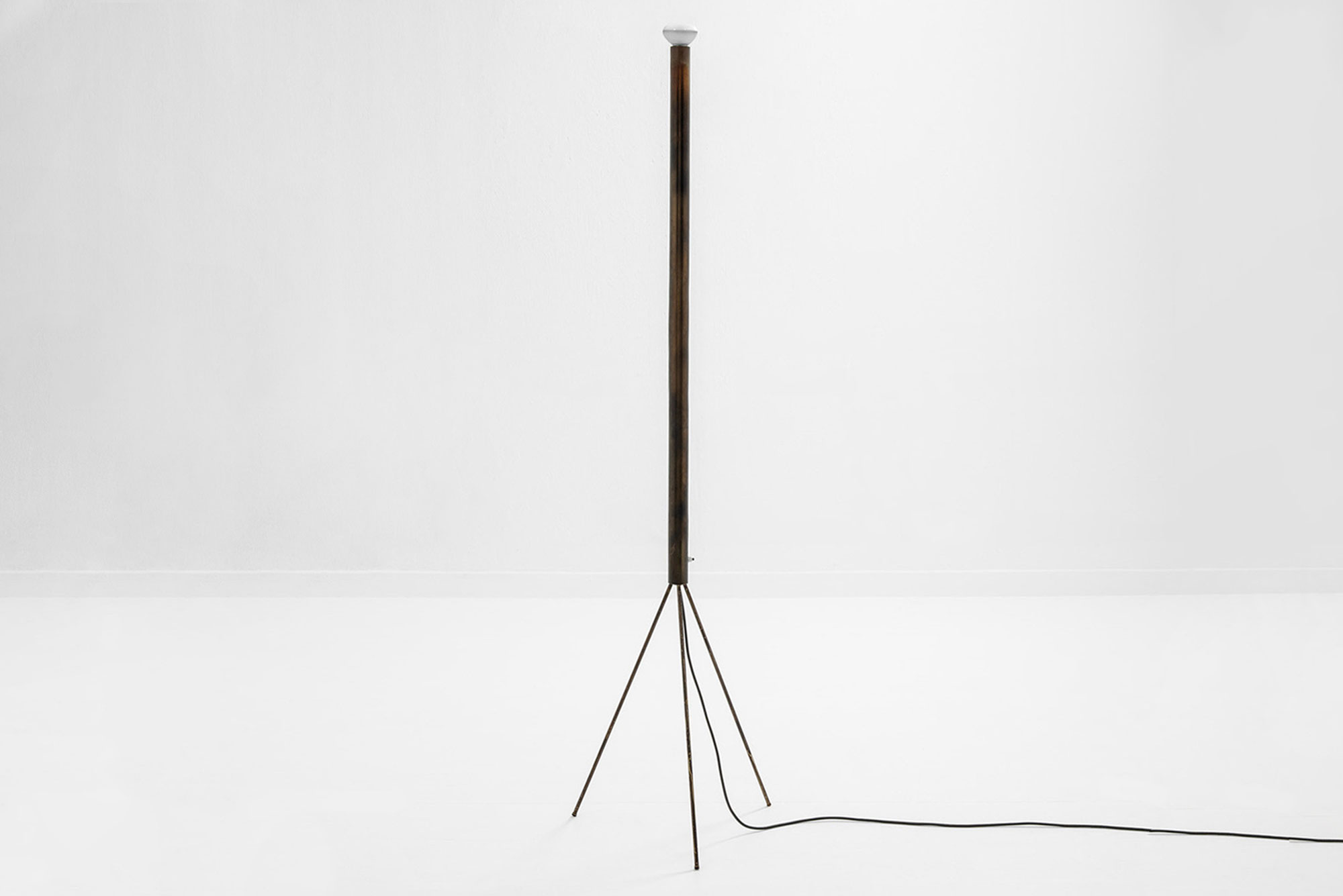 The Luminator floor lamp, designed byPier Giacomo and  Achille Castiglioni in 1955,  was manufactured by Gilardi e Barzaghi and won the Compasso d’Oro award that same year. This very simple lamp was later manufactured by Arform in 1957, and a slightly different version has been produced by Flos since 1994.

The Taccia lamp is one of the most successful and beautifully executed designs of Pier Giacomo and Achille Castiglioni. The design was conceived in 1958, perfected in 1959, and manufactured by Flos in 1962. The light source is embedded in a small metal Roman column, and the light projects upwards on to a concave white metal reflector laid on top of a beautifully crafted hand blown glass in the shape of a truncated hyperbolic sphere. 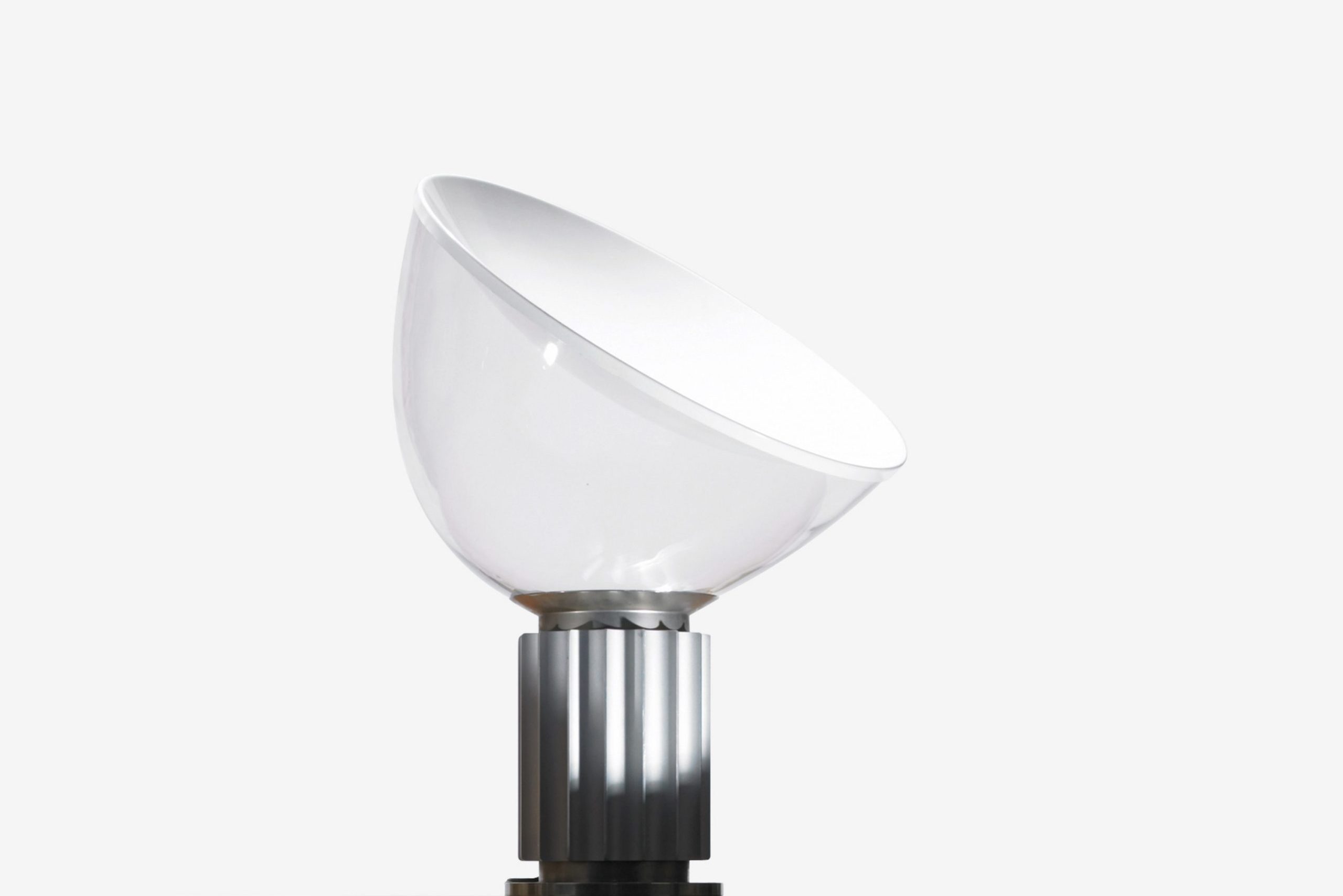 Twelve years after Pier Giacomo and Achille Castiglioni designed the Taccia, Achille said in an interview, “We consider it the Mercedes of lamps, a symbol of success: perhaps because it looks like the shaft of a classical column. We certainly weren’t thinking of prestige when we designed it. We just wanted a surface that would stay cool.”