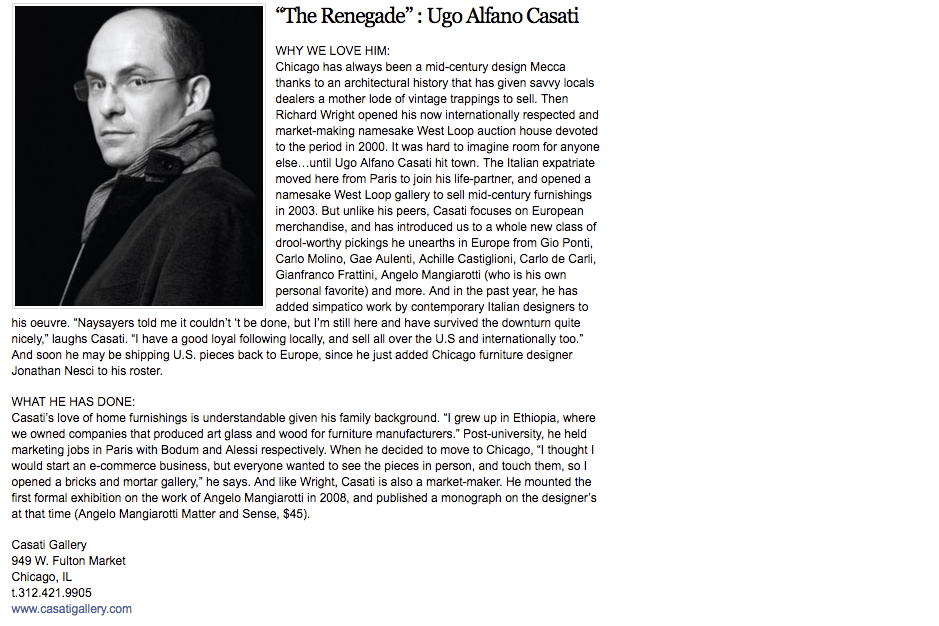 Article from the ‘Chicago Art Magazine’ by Kathryn Born

WHY WE LOVE HIM:
Chicago has always been a mid-century design Mecca thanks to an architectural history that has given savvy locals dealers a mother lode of vintage trappings to sell. Then Richard Wright opened his now internationally respected and market-making namesake West Loop auction house devoted to the period in 2000. It was hard to imagine room for anyone else…until Ugo Alfano Casati hit town. The Italian expatriate moved here from Paris to join his life-partner, and opened a namesake West Loop gallery to sell mid-century furnishings in 2003. But unlike his peers, Casati focuses on European merchandise, and has introduced us to a whole new class of drool-worthy pickings he unearths in Europe from Gio Ponti, Carlo Mllino, Gae Aulenti, Franco Albini, Achille Castiglioni, Carlo de Carli, Gianfranco Frattini, Angelo Mangiarotti (who is his own personal favorite) and more. And in the past year, he has added simpatico work by contemporary Italian designers to his oeuvre. “Naysayers told me it couldn’t ‘t be done, but I’m still here and have survived the downturn quite nicely,” laughs Casati. “I have a good loyal following locally, and sell all over the U.S and internationally too.” And soon he may be shipping U.S. pieces back to Europe, since he just added Chicago furniture designer Jonathan Nesci to his roster.

WHAT HE HAS DONE:
Casati’s love of home furnishings is understandable given his family background. “I grew up in Ethiopia, where we owned companies that produced art glass and wood for furniture manufacturers.” Post-university, he held marketing jobs in Paris with Bodum and Alessi respectively. When he decided to move to Chicago, “I thought I would start an e-commerce business, but everyone wanted to see the pieces in person, and touch them, so I opened a bricks and mortar gallery,” he says. And like Wright, Casati is also a market-maker. He mounted the first formal exhibition on the work of Angelo Mangiarotti in 2008, and published a monograph on the designer’s at that time (Angelo Mangiarotti Matter and Sense, $45).