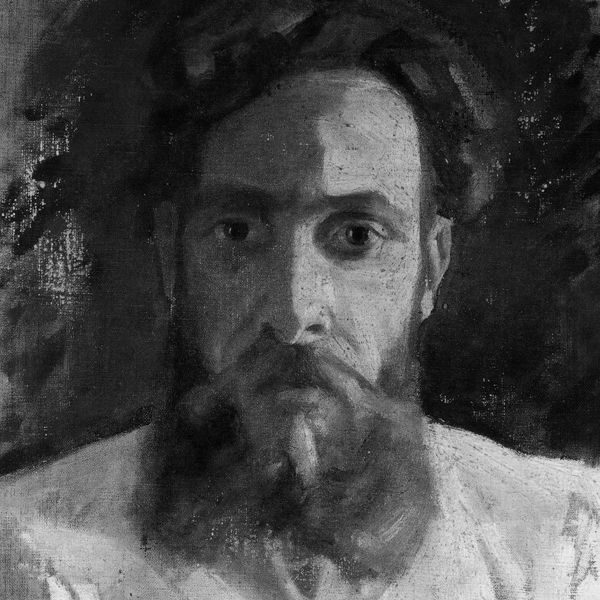 A pivotal figure in 20th Century Italian glass art and considered by many as the first truly Modern glass artist of Italy.

Vittorio Zecchin (born May 21, 1878, Murano, Italy–died April 15, 1947, Murano, Italy) was an influential Italian painter, tapestry maker, furniture designer, and glass designer. Zecchin attracted critics and clientele of the time with his glass designs that simultaneously evoked ancient and Renaissance styles while also instilling a new modern sensitivity. Zecchin became an influential figure in the conversation among Italian artists and designers inspired by the avant-garde sentiment in Venice during the early years of the 20th century.

Born on the island of Murano, just outside of Venice, renowned as Italy’s artistic glassmaking center, Zecchin earned early exposure to the art of glassmaking as his father, Luigi, was a glassblower himself. While he developed an early passion for the medium, Zecchin disliked the heavy ornamental styles that dominated late 19th century and turn-of-the-century art and design.

In 1896, Zecchin enrolled at the Accademia di Belle Arti di Venezia to study art, but after five years he faced an emotional crisis and decided to abandon his dream of becoming an artist. Instead, he initially worked on the town council for a few months and then started a job as a worker at a glass furnace for one of the glass workshops in Murano. At this workshop, Vittorio Zecchin became very familiar with the different glassmaking techniques used in Murano. However, after a couple of years at the workshop, his artistic vocation started to reemerge, and he began to engage in the Venetian artistic life. His frequent visits to the Venice Biennales also allowed him to immerse himself in the artistic European currents of the time. At the 1905 Venice Biennale, Zecchin was particularly impressed by the Symbolist style of the works of the Dutch-Indonesian painter Jan Toorop. In 1909, he became involved in the vibrant artistic activity around the transformation of the Venetian palace Ca’ Pesaro into a modern art museum, funded by the Duchess Felicita Bevilacqua La Masa, and in 1910, he became familiar and deeply inspired by the Secessionist work of Gustav Klimt presented at the Wiener Werkstätte in Venice. 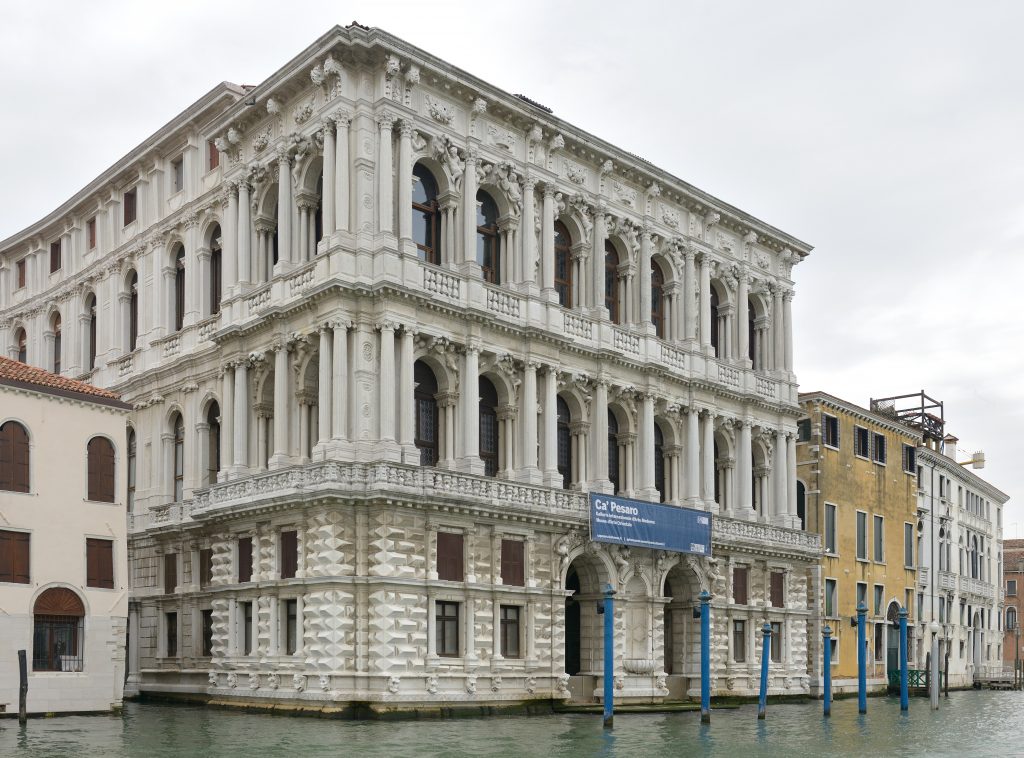 At Ca’ Pesaro, Zecchin fully immersed himself in his artistic career alongside young artists such as Amedeo Modigliani, Umberto Boccioni, and Teodoro Wolf Ferrari. Through the dedication and resources of Felicita Bevilacqua, Ca’ Pesaro became an influential modern art museum, and Venice was transformed into one of the most vibrant cultural European cities of the time. At Ca’ Pesaro, Zecchin created small representative paintings incorporating the colors and shapes that he had become highly familiar with at the glass workshops. In 1912, Vittorio Zecchin and Teodoro Wolf Ferrari founded L’Arato, a group of artists dedicated to integrating the artistic practices of painting and sculpture into decorative arts, such as jewelry, furniture making, and textiles.

In 1913 and 1914, Zecchin, with the assistance of Artisti Barovier, designed a small number of Secessionist-style mosaic glass pieces that were exhibited in Munich in 1913 and at the Venice Biennale in 1914. These pieces earned Zecchin great acclaim from critics and the market. In 1914, Zecchin created his most important painting, Le Mille e una notte, in which he clearly displays a personal pictorial language, the influence of Gustav Klimt, and the polychrome enamels of Murano glass. But by 1919, Zecchin had moved away from painting, and at the Ca’ Pesaro exhibition of that year, he exhibited only tapestries, embroideries, and enameled glass pieces, showing a marked preference for decorative arts.

By the mid 1910’s, Zecchin had established his own small tapestry workshop in Murano, and in 1918, he began to design a small production of glass works. This time, he made transparent glass designs with gold and enamel accents and in forms taken from the 16th and 17th centuries.

From 1921 to 1925 at V.S.M. Cappellin Venini & C. and from 1925 to 1926 at Maestri Vetrai Muranesi Cappellin & C., or M.V.M. Cappellin & C., after the Capellin-Venini split, Zecchin became the most renowned and modern glassmaker of his time. He designed transparent and lightweight pieces with elegant lines and simple shapes that clearly distinguished themselves from the highly ornate glass pieces made before his time. He often chose delicately translucid yet intense colors, such as yellow, green, amethyst, and blue, for his mostly monochromatic pieces. The iridescent quality of many of his pieces was the result of an elaborate process in which he placed the pieces, while they were still hot, in tin or titanium vapors, a process that is no longer in practice. After the separation of Cappellin and Venini, Paolo Venini named his company Vetri Soffiati Muranese Venini & C., or V.S.M. Venini & C.

While at M.V.M. Cappellin & C., from 1925 to 1926, Zecchin continued to create the old V.S.M. Cappellin Venini & C. models but expanded his production to include slightly modified versions with identical designs in different sizes and, sometimes, the rigorous and controlled use of decorations, such as inverted drops, thread, and chain motifs.

In 1926, Vittorio Zecchin left M.V.M. Cappellin & C. with the intention to dedicate more time to the creation of tapestries, embroidery, furniture, and mosaics. In spite of his intentions, Zecchin continued to collaborate with the main Murano glass makers and designers of the time such as: Ferrro Toso in 1930; A.V.E.M. in 1932; Barovier Seguso Ferro–with Archimede Seguso, later known as Seguso Vetri d’Arte, in 1933; F.lli Toso in 1938; and after that S.A.L.I.R.

From 1934 until his dead in 1947, Zecchin taught in several Venetian institutions including the “Scuola per L’Industria Vetaria,” the apprentice school “Abate Zanetti,” and the technical institute “Instituto Vendramin Corner.” He also published two booklets with personal drawings. One about the history of glass and the other about the history of mosaic.

For additional information on Vittorio Zecchin, please visit the following: 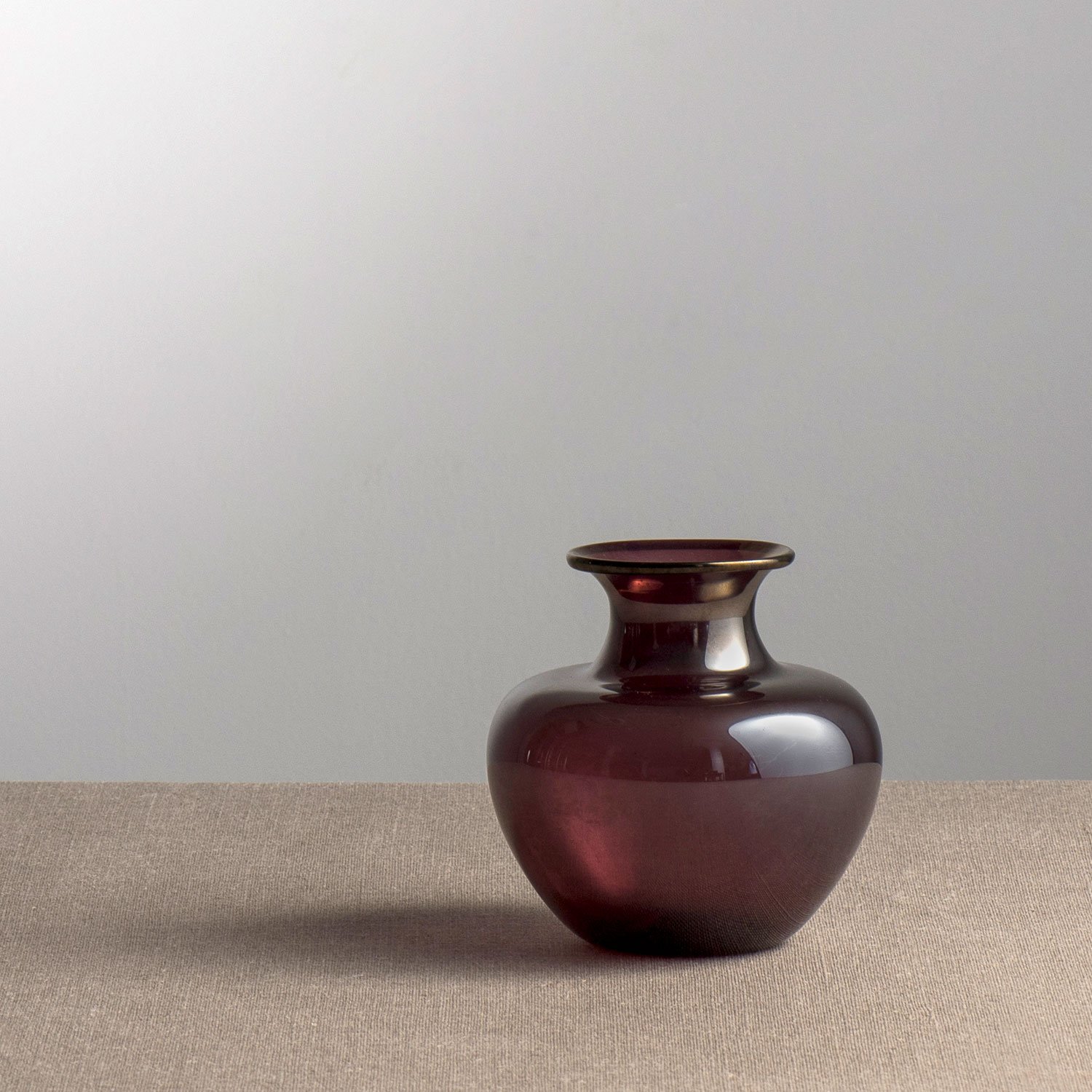 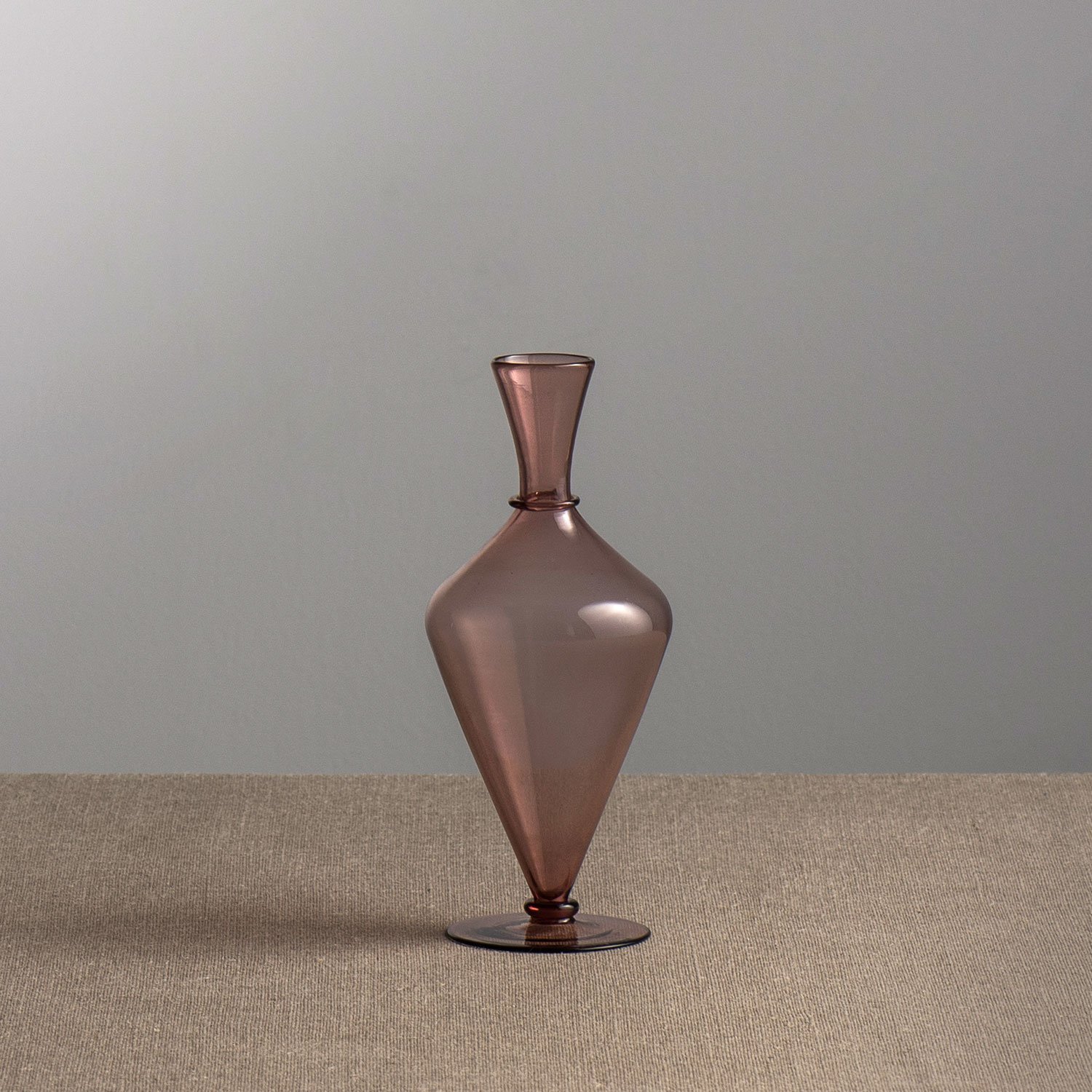 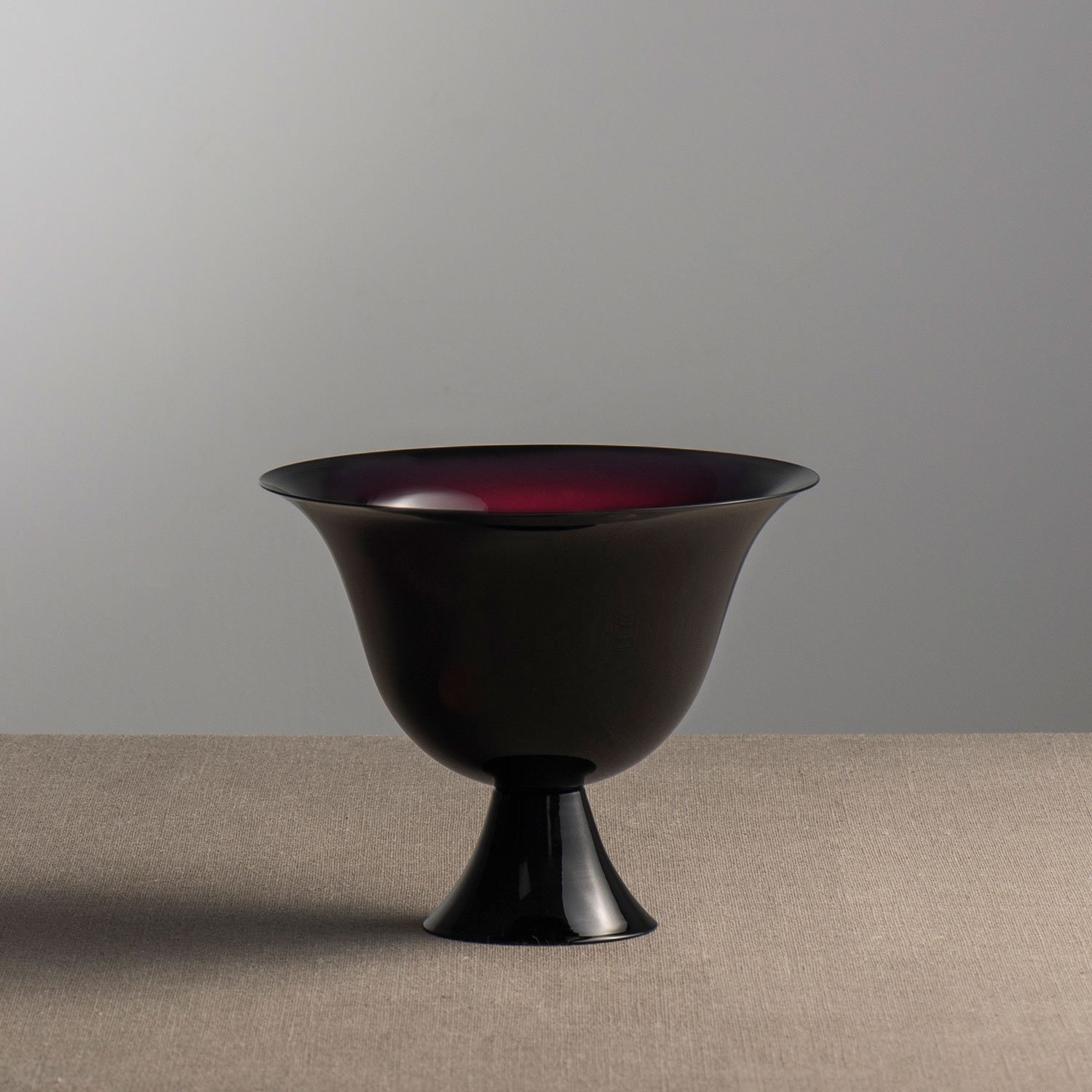 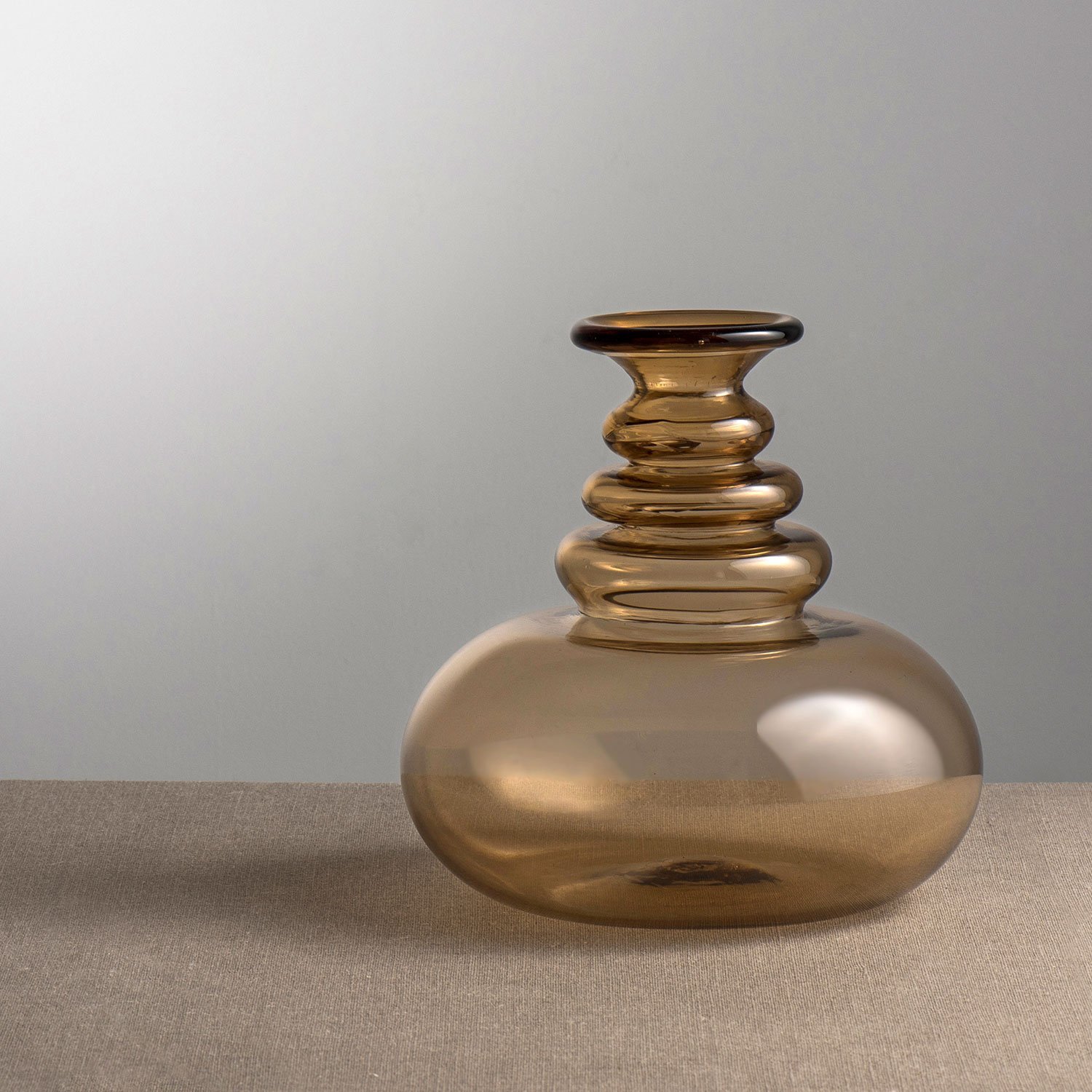