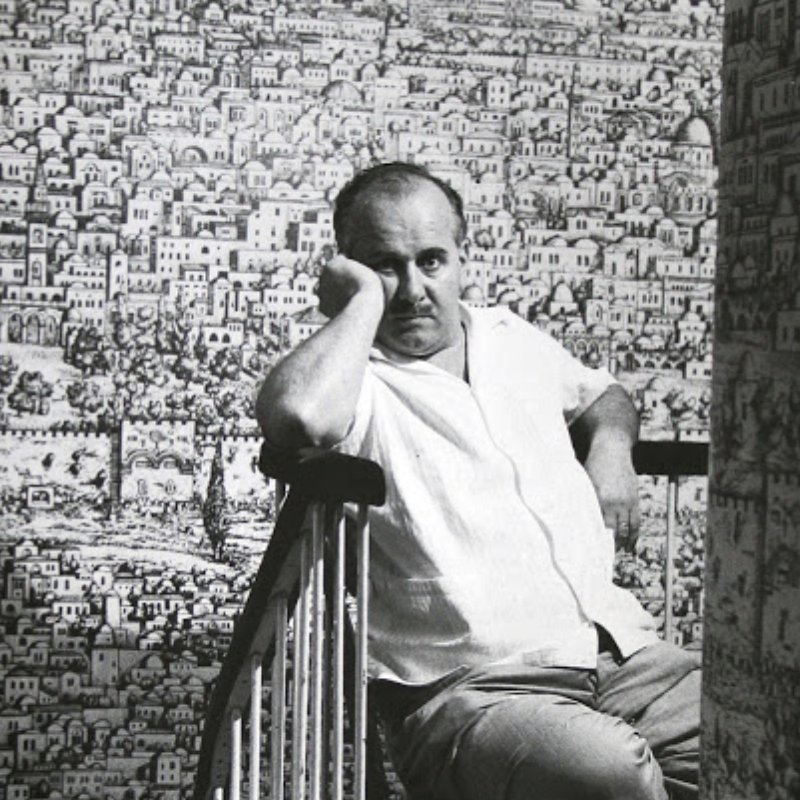 “I want to free my inspiration from the limitations of the usual.”

Fornasetti lived most of his life in Milan. A talented and artistic young man, he studied at the Accademia di Belle Arti di Brera (where he was later expelled for insubordination) and the Castello Sforzesco school. During World War II, he was expelled again—this time from Italy altogether—and went on to develop as an artist in Switzerland from 1943 to 1946. He used an educational grant to travel to Africa—a trip that opened up the world and benefitted him more than any schooling could.  read more

When he returned to Milan from Africa, one of his first projects was the painting of silk scarves, which caught the attention of Italian architect Gio Ponti. It was the beginning of a long and productive partnership as Fornasetti and Ponti collaborated on numerous projects in the following years.

Beginning in the early 1950s, Ponti and Fornasetti created a series of desks and bureaus that combined Ponti’s angular forms with Fornasetti’s decorative motifs—arrangements of flowers or architectural imagery. But, undoubtedly, the most important Ponti-Fornasetti collaboration of this time is the Architettura series; which was launched in 1952 Triennale di Milano. This series consisted of Gio Ponti volumetric furniture designs that were completely enfolded with motives of neoclassical building façades and decorations that added perspective depth to the volumes.

The duo also worked together on an interior decoration project at the San Remo Casino, but their greatest collaboration has been lost: the lounges and restaurants of the luxury ocean liner Andrea Doria, which sank in 1956.

Fornasetti’s work was influenced by Greek and Roman architecture, surrealism, and metaphysical art. His signature motif was the face of Lina Cavalieri, an opera singer who lived at the turn of the 19th and 20th centuries, whom he discovered while leafing through a 19th century magazine. Fornasetti used Cavalieri’s visage to decorate his Tema e Variazioni (Theme and Variation) series of plates, which numbered more than 350. He mused, “What inspired me to create more than 350 variations on the face of a woman? I don’t know. I started making them and never stopped.”

In 1959, Piero Fornasetti received the Neiman-Marcus Award for distinguished service in the field of fashion.

His furnishings occupy a unique niche in the decorative arts: they are surreal and impactful and act as functional sculpture. He was specifically known for a series of round tables, which he decorated with trompe-l’oeil paintings of musical instruments and depictions of the sun.

With the advent of pop culture and the conceptual designs of the late 1960s, Fornasetti’s work declined in commercial popularity forcing  him to significantly reduce the number of workers of this workshop in Milan from approximately 30 to only 3.

After Piero’s death in 1988, his son Barnaba Fornasetti took the reins of the family business. Although it is not clear who is the current owner of the company, today many of Piero’s original designs have been generously applied to such accessories as scarves, ties, wallpaper, home-fragrance packaging goods, etc.

In 1991, the Victoria & Albert Museum in London had a comprehensive retrospective of the work of Piero Fornasetti which allowed many to reconsider his contribution to design. As a consequence of this exhibition, there has been a resurgence in the interest, popularity and prices of the original vintage productions of Piero Fornasetti’s furnitures and designs.

Piero Fornasetti : A Conversation between Philippe Starck and Barnaba Fornasetti