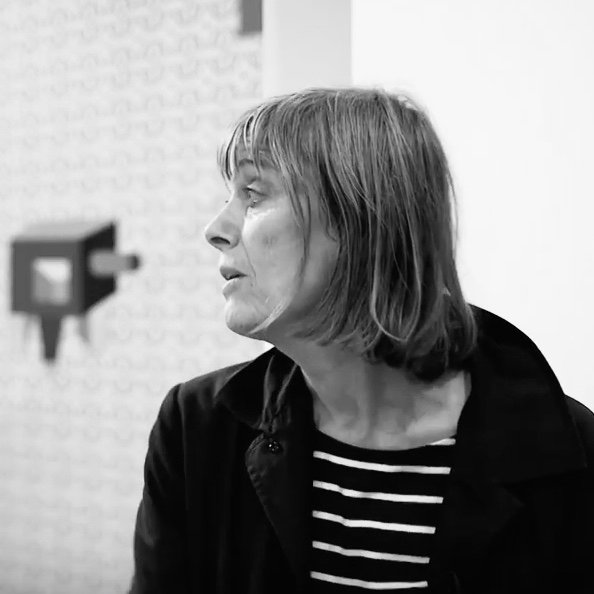 Nathalie du Pasquier (born 1957, Bordeaux, France) is a Milan-based designer and artist who was a founding member of the 1980s design studio powerhouse Memphis Group. Nathalie du Pasquier’s creative design career included works across a wide variety of media, from textiles and clothing to jewelry and furnishings, but in the late 1980s, she shifted her interest from design to art.

Natalie du Pasquier gained some of her most intense inspiration from a trip in her twenties through western Africa. Compelled by the colors and patterns of African design, she returned to Europe and soon after settled in Milan in 1979 to establish her own design practice, which re-envisioned the energized pairings of colors and forms that she had seen during her travels.

In early 1981, du Pasquier made the acquaintance of British designer George Sowden (born 1942) while working at Olivetti, who had already teamed up with Ettore Sottsass at the Memphis Group to investigate novel design approaches. Shortly thereafter, du Pasquier was introduced to the Memphis Group and was asked to join; becoming the youngest member of the group.

While du Pasquier’s early years with the Memphis Group were characterized by a wider exploration of various media, including textiles (see her Gabon textile [1982]), du Pasquier became so wholly devoted to painting that by 1987 she had declared it the main focus of her production. Thus, while other figures in the Memphis Group explored different threads of design, du Pasquier’s refined focus afforded her the opportunity to fully envelop herself in an exploration of the dynamic relationships between patterns and palettes in her work.

Driving du Pasquier was a mission to pull together the various threads of different traditions into their own modern aesthetic. As she noted in a 2015 interview, “Memphis existed before the internet, and all the ingredients of Memphis were things that were coming from a lot of different horizons.”

This compulsion to seek the new and ahead of its time has continued for du Pasquier into the 21st century as she continues to work in her Milan studio. She also maintains an active exhibition schedule and completed a solo showcase of her work at the Pace Gallery in Seoul, South Korea, in spring 2019.