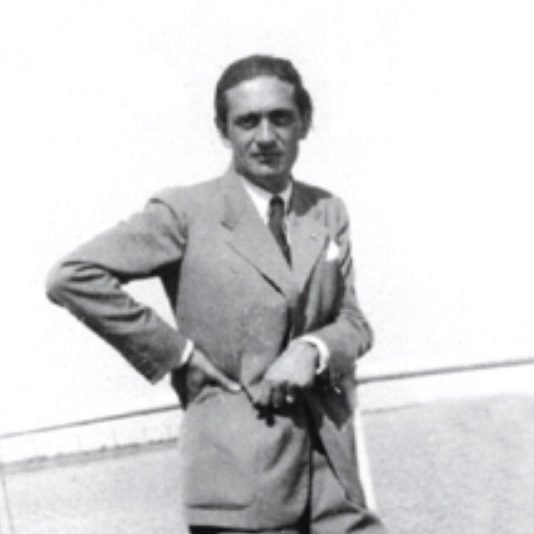 Guglielmo Ulrich (born 1904, Milan–died 1977) was an Italian architect, furniture designer, and painter. He was born to a notable family of Danish origin. In 1924, Ulrich enrolled in the Scuola Speciale di Architettura at the Accademia di Belle Arti di Brera. He finished his studies at Politecnico di Milano in 1927 and soon became a very influential figure in modern Italian design.

In 1930, along with Scaglia and Wild, Guglielmo Ulrich founded and became head designer of home furnishing company Arca (Arredamento casa, or Home Furnishing), a company engaged in the creation of high-quality furnishing accessories characterized by craftsmanship and the use of premium materials.  In the 1950s, he participated in several editions of the Triennale di Milano and concentrated on designing buildings, offices, and retail shops throughout Italy. read more

Most of Ulrich’s furniture designs from this era, and especially his chairs and chaise lounges, resemble simplified and streamlined design versions of late 19th century pieces and do not necessarily conform to modern designs prevalent in northern Europe and the U.S. in the 1950s. In the 1960s, Ulrich focused his work toward industrial design and was able to create original and impactful objects. His talent was rewarded on many occasions. In 1961, he won the Fiera di Trieste award for his Trieste chair, produced by furniture maker Saffa.

Ulrich’s work is elegant and rich in detail. Although his work does not quite conform with the strict norms of simplicity of the time, it fits the prevalent aesthetics of Modernism.