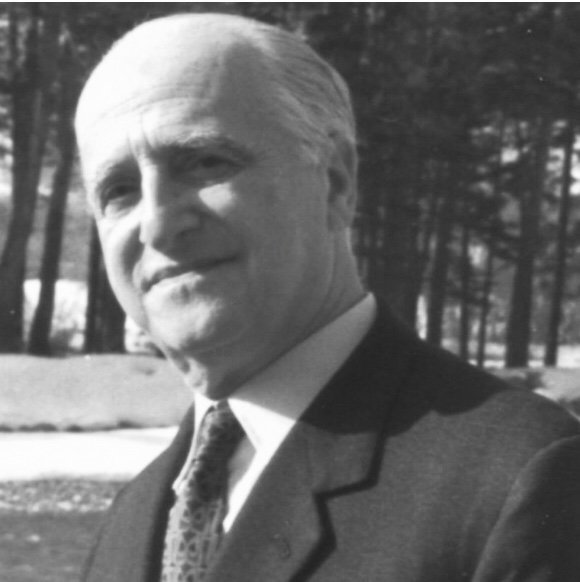 Gino Levi Montalcini, named Luigi Levi Montalcini, (born April 21, 1902, Milan, Italy–died November 29, 1974, Turin, Italy) was an Italian modernist furniture designer, architect, and artist. He was born into a jewish sephardic and cultured family that pursued intellectual achievement. His father was Adamo Levi, an electrical engineer and mathematician, and his mother the painter Adele Montalcini. He studied in Turin at the Liceo Classico Massimo D’Azeglio, where he took private courses in drawing and sculpture, and in 1925, he graduated from the Royal School of Engineering (now Politecnico di Torino).

After separating from Pagano, Gino Levi Montalcini moved to Milan, and he and his family were affected by the anti-Jewish laws in 1938 (as Jews were not allowed to hold university posts or practice medicine). In 1943, he married Maria Gattone, and from 1943 until 1945, they were displaced to Florence, where, under false names, they escaped the anti-Jewish persecution. At the end of World War II, his parents, twin sisters and younger brother returned to Turin, and in 1946, Gino Levi Montalcini joined the Giuseppe Pagano engaging in the process of postwar reconstruction.

In the 1950s, Gino Levi Montalcini worked on numerous architectural and furniture design projects, in addition to serving as a lecturer in architectural composition at Politecnico di Torino from 1948 to 1956. During this period, he became a prolific designer of furniture and objects, starting with 67 furniture pieces for the Palazzo Gualino and other furnishings for important public buildings, such as the Hall of the Press in Turin and the Borletti in Galleria San Federico, as well as for exhibitions.

Gino Levi Montalcini also explored his artistic interests as a sculptor, for which he had an early vocation, and made drawings, portraits, and caricatures. His sculptures and portraits in pen and oil are reminiscent of those of Pagano, Carlo Mollino, and other architects from Turin. He served as a professor at the Faculty of Architecture of the University of Palermo from 1956 to 1964 and at the Faculty of Engineering at the University of Padua from 1964 to 1971.