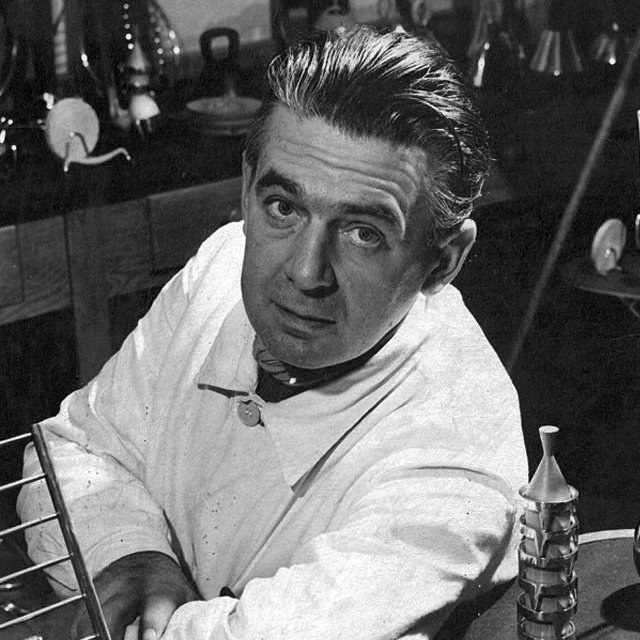 Carl Auböck II (born 1900, Vienna, died 1957, Austria) was an Austrian designer in the multigenerational workshop Werkstätte Carl Auböck. Carl Auböck II built on the influence of the early 20th century Bauhaus style to develop a novel approach to designing domestic objects that would be essential to the evolution of Austrian modernism.

Born in Vienna at the dawn of the 20th century, Auböck II trained as a student of painting within the Austrian capital city’s Academy of Fine Arts. After graduation in 1919, Auböck II pursued further study within the Bauhaus under the tutelage of Swiss expressionist painter Johannes Itten (1888–1967). After several years of absorbing the Bauhaus ideals, Auböck II returned to Vienna to join his father’s studio, the Werkstätte Carl Auböck, which had opened in 1912 and grew to acclaim for its small bronze figurines, which became known as “Vienna Bronzes.” Auböck II had apprenticed under his father in this studio prior to beginning his studies at the Academy of Fine Arts, so his reintroduction and eventual takeover of the family company in 1926 was a rather seamless process. read more

Once Auböck II took control, the production of the Werkstätte shifted to decidedly more modern forms. Considering closely the aspects of interior design, Auböck II worked to create streamlined forms that were ideal for the modern interior. As a result, Auböck II carried the vision of the Werkstätte into the realm of functional objects and focused on more rudimentary materials. For example, he replaced the use of bronze with that of brass and considered closely how to simplify forms for aesthetic attraction along with ultimate utility. This began with generally smaller, decorative objects like paperweights and serving bowls but grew such that by the later 1940s he was also producing larger furnishings and accent lamps.

Auböck II eventually invited his son to join in the business, and the endurance of the brand has been ensured by a strong succession of Auböck relatives. Auböck II’s death in 1957 put at the helm his son, Carl Auböck III, who carried the brand into another successful generation of modernist innovation. Building on his father’s passion for the modernist aesthetic, Auböck III infused those sensibilities with his own interests in industrial design. The Werkstätte Carl Auböck continues to operate today under the management of Auböch II’s grandson, Carl Auböch IV.

“Beyond Mere Function: The Carl Auböck Workshop.” The Line, 25 February 2014.