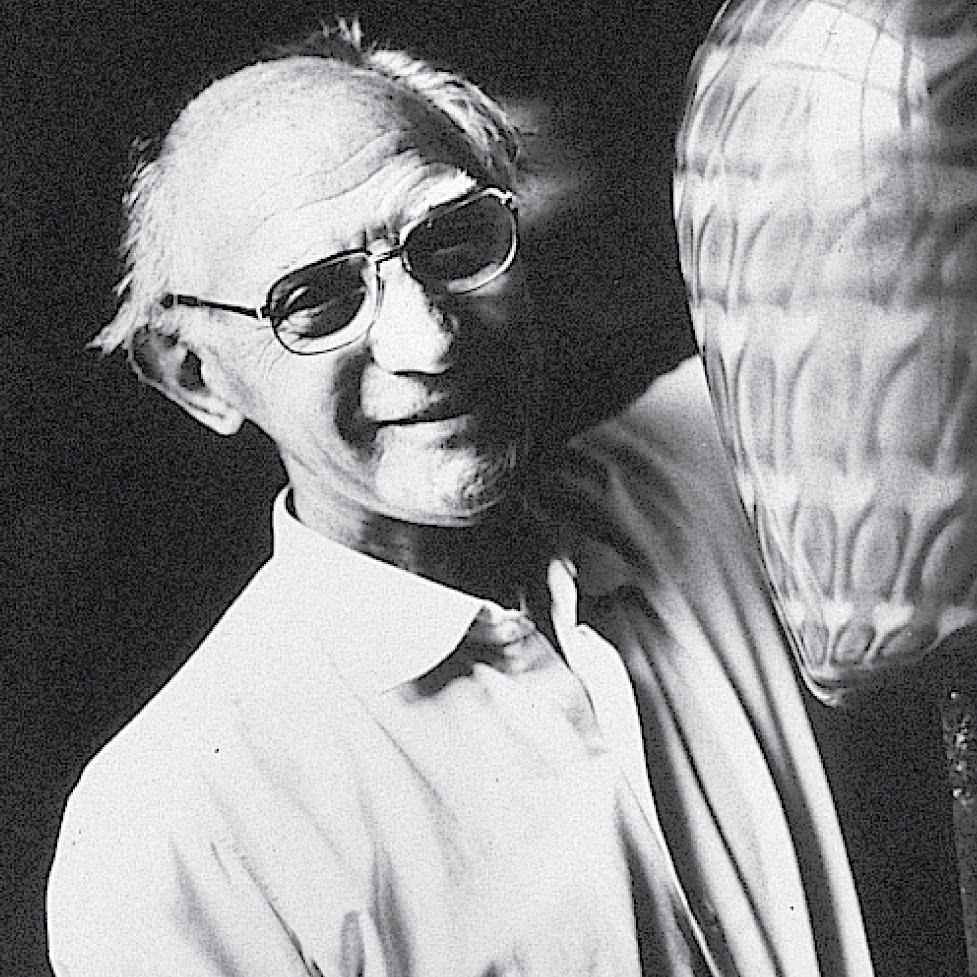 Archimede Seguso (born 1909– died 1999) was one of the 20th century’s master Venetian glassmakers. He was a key figure in the survival and revival of traditional glassblowing techniques in Murano, Italy. Original in his designs yet consistently mindful of the legacy of glassmaking, Seguso crafted a timelessly tantalizing array of glass pieces throughout his career.

Born in Italian glass making center of Murano in 1909, Seguso grew up in the midst of one of Venice’s most historic glassmaking families: the Seguso line in the glass industry can be traced back to the 14th century, and, to this day, the family continues to maintain one of the largest glass furnaces in Murano. Archimide Seguso decided to follow in his family’s strong tradition by initiating his training as a glassmaker at the age of 11, and he became a maestro of his father’s glass company when he was 20 years old. At that time, Vittorio Zecchin and Flavio Poli were invited to collaborate with him as designers.

By the late 1930s, Archimide had taken over the sole control of the family business, named Seguso Vetri d’Arte (as of 1933). In 1946, he founded his own glassmaking company, Vetreria Artistica Archimede Seguso, where he would pursue his designs in new directions. This was during the time of the Italian reconstruction, which fueled the demand for his chandeliers. It was also during this time that he created numerous light pieces for public spaces, such as hotels, movie theaters, theatres, and churches, becoming the leading Murano glassmaker of the time.

Archimide Seguso was fascinated by the results possible through artistic experimentation, but he also maintained a deep appreciation for the time-tested techniques of Venetian glassblowers that transformed the medium in such striking ways. He studied and mastered 16th century styles, such as filigrana glass, characterized by the manipulation of glass canes to give the appearance of linear patterns, and piume glass, which incorporated delicate feather-plume shapes into richly colored glass pieces. Seguso also created new stylistic design elements, such as the cordonati, which had a ribbed effect; the ad anelli, which featured rings (1948); the aghiformi, which featured needle shapes; the opaque gold; and the nude in black and iridescent crystal (1949).

Archimide continued to innovate by creating interesting glass-design pieces during the 1950s and 60s, such as the Aleanti, the Starry Filigree, the Onion, and the Optical, in addition to creating glass sculptural pieces.

In addition to his participation in 13 appearances in the Venice Biennale between 1936 and 1972, Archimide Seguso was also invited to participate in the exhibit “A Thousand Years of Glass in Venice” at the Museo Correr in 1982, and he had a solo exhibit of his work at Tiffany & Co. in New York in 1989.

Archimide died one decade later, in 1999, in Murano. The Seguso glass studio lives on though, as does Archimede Seguso’s name, through his masterful glass creations still found today in numerous international collections and museums, including the Victoria and Albert Museum in London, the Museum of Modern Art in New York, and the Corning Museum of Glass.

For additional information on Archimide Seguso, please visit the following: