Guido Gambone (June 27, 1909, Montella, Italy–1969, Florence) is one of the most prominent Italian ceramicists of the 20th century. Guido Gambone defined a unique style in which he fused traditional ceramic methods with amorphous forms that echoed equally the art of the past and of his modern day. His dynamic objects, in which he often experimented with glazes and patterns, garnered great popularity and today are treasured holdings in private and museums collections such as the one at the Brooklyn Museum.

Born in Montella in the southern Italian region of Campania, Gambone received his earliest training in the art of ceramics at the Manifattura Artistica Ceramica Salernitana in nearby Vietri sul Mare. He continued his studies at the Industria Ceramica Salernitana (I.C.S.) and eventually took over as director of the facility in 1935. The following year, he moved northward to Florence with fellow ceramicists Vincenzo Procida and Francesco Solimene to assist in the production of the Cantagalli ceramics company, which derived its name from founder Ulisse Cantagalli (1839–1901) and specialized in reviving the rich colors and patterns of the Maiolica tradition. read more

In the early 1940s, Gambone teamed up with his brother, Remigio, and friend Andrea D’Arienzo to establish the ceramic factory La Faenzarella pottery group in Vietri Marina, Salerno. Although the company initially, grew slowly given the wartime conditions, Gambone won awards for his pieces made at La Faenzerella only a few years later. In 1947, for instance, Gambone received the Premio Faenza award for a ceramic panel he had created. The brilliance of this phase of Gambone’s ceramic design was in his use of thick glazes often rendered more viscous thanks to the addition of sand. He continued in this style into the 1950s, when he established a second workshop, La Tirrena, in Florence. In this new space, Gambone advanced his earlier La Faenzerella designs by working in larger and even more elaborately amorphous forms. Here, he joined forces once again with ceramicist Vincenzo Procida and also worked collaboratively with his son, Bruno.

The year 1950 also marked the showcase of one of Gambone’s collaborative works at a group exhibition at the Brooklyn Museum in New York, and the following year Gambone enjoyed his first solo showing at the Galleria Il Milione in Milan. By the end of the decade, Gambone had achieved international acclaim for his pieces. He upheld his dedication to his work until 1967, when the La Tirrena workshop closed its doors. Gambone died two years later at the age of 60. 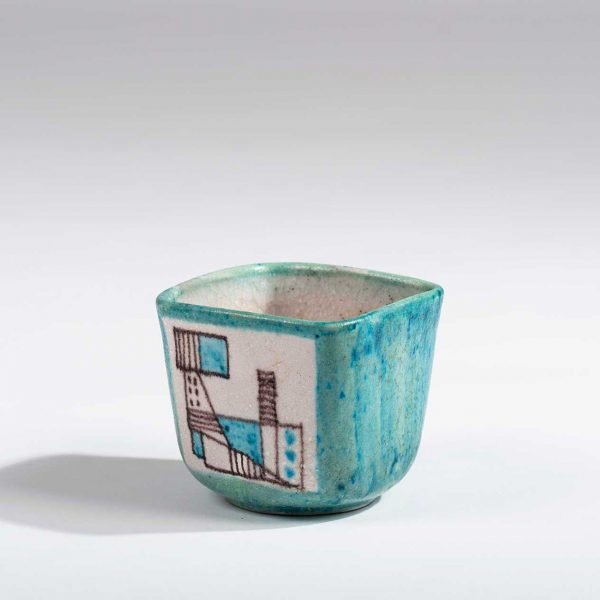